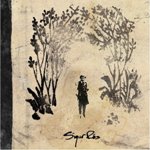 Takk is Icelandic for "thanks," as well as the message Sigur Ros flashes on screen at the end of each of their live shows when they come out to take a bow, like the cast at a theater. A nice choice as title of Sigur Ros' fourth full-length record, almost a message to their growing, devoted fan base.

Their last two records, Agaetis Byrjun and ( ) brought the band to a level of international celebrity best characterized by the fact that their celebrity is found in repeated appearances on NPR's "All things Considered" and on Cameron Crowe and Wes Anderson film soundtracks. If there were an O.C. for people who hate the O.C. on the grounds that it's destroying popular culture by giving bands like Modest Mouse and Spoon a sinfully large listening base, Sigur Ros would undoubtedly play that simulacrum's local coffee house (and give them a sinfully large listening base as well).

Enigmatic, singing in a language defined as an amalgam of Icelandic, English and high-pitched OOOing and AWWing, (dubbed by the band as "Hopelandic"), Sigur Ros is aptly characterized as more a type of classical music or opera or new-jazz rather than "rock" or, even, "indie-prog-math-stargazer rock." Their live performances leave audiences either paralyzed with emotion or with a desire to take a nap, but nevertheless numb and affected.

Takk strays from where their previous records took them — ( ) was a sweepingly untitled powerballad of Hopelandicisms and guitars, while Agaetis Byrjun was much more subtle and dark. Takk finds the band experimenting with shorter songs (think 5 or 6 minutes vs. the previous 8 – 10), an abundance of strings and horns, and sharper, more defined melodies.

Singles "Glosoli" and "Saeglopur" announced this departure early on this summer. While the band hasn't lost anything "Sigur Ros" about themselves, they have pushed themselves into a new place. "Glosoli" is easily one of the most beautiful songs of the year, a six-and-a-quarter minute crescendo of strings, keys and guitars. And before the full record's release, "Saeglopur" seemed the poppiest, most melodic thing the band has done to date. (Although this description, now, has to be given to album track "Hoppipolla").

Both of the "poppier" songs are built around catchy piano riffs that make you tap a foot as much as any Tullycraft song. And like a lot of Sigur Ros, they explode into cymbals and diamonds at the end.

Not to be forgotten, there are long, ominous tracks on Takk as good as anything else the band has put out to date. The record is, overall, exactly what has come to be expected from Sigur Ros — a sweeping, beautiful collection of music to conjure the Icelandic landscape in watercolor and poetry.