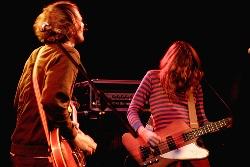 Every birthday I make a trip to the record store and allow myself to fill my arms with treats without feeling guilty, because it's my special day. This year the Silversun Pickup's EP Pikul was my first pick. I had "Kissing Families" on repeat (on my CD player and in my head) for weeks after my impulse purchase. I love the fancy guitar work and the catchy boy/girl singing banter.

Live they sound just as tight as they do on their EP. Coupled with their witty slightly-drunken stage chatter, there was no better place to be on a Tuesday night than the Crocodile.

The power of KEXP is amazing. "Kissing Families" has gotten consistent airplay on the station, as well as placement on a KEXP podcast, so I suspected there'd be a lot of Morning Faithful folks present. But the room was packed, and on a Tuesday no less. Incredible. Speaking of incredible, there's something a bit above and beyond the ordinary with the song "Kissing Families." It reminds me of when I first heard "Smells Like Teen Spirit" years ago. At the time, I didn't know I was hearing a revolution. I'm reluctant to make the comparison, but the song reminds me of Nirvana — or specifically, of "Smells Like Teen Spirit." I hear it in the musical transitions, the release of screaming climax, the gravely disquiet of the vocals, and the relentless glue of the thudding bass… but mostly, I hear it in the way the song has grabbed so much collective attention. But maybe I'm just crazy…

Comparison's the Pixies are inevitable and I'm sure have been made (what with the female bass player / backup vocalist), and during the more powerful instrumentals, I thought Kinski was a likely target for comparison too.

They also had a great sense of humor. "Whiskey. It's the Devil's Chocolate. We have it in LA but we're not sure if you have it up here," quipped front man Brian Aubert. Out-of-town jokes notwithstanding, Silversun Pickups feel like a local band. They look and sound very Seattle, and with all the KEXP love they've been getting and their huge Seattle reception, I bet the show felt like a sort of homecoming for them. Minus the pep-rally. This is Seattle, after all.

Following Silversun Pickups on this two-band bill (which was nice on a school night) was Brendan Benson. The near decade of being in the music industry and hanging out in smoky bars has weathered Brendan, but he creates surprisingly melodic, fresh, bright tunes with thoughtful, clever — albeit sometimes melancholic — lyrics layered with sugar sweet harmonies create a thick sound that translates surprisingly well on stage.

Not to mention Brendan is a fellow Michigander (I know, it's hard to hear my accent in type) and lives a few streets over from Jack White in Detroit. In fact, they're working on an album together under the moniker the Raconteurs (French for "skilled teller of anecdotes") with a tentative release date of early next year. Allegedly, people who have heard the soon-to-be infamous release have coined it "Detroit's answer to Nevermind." It will be interesting to hear Brendan's sugar-pop mixed together with Jack's dirty minimalist garage rock.

Wow Char, I did not know that. Maybe my whole Nirvana ramble for Silversun Pickups was just me picking up psychic audio vibes from the upcoming Raconteurs record…. erm, or something.

I've been a fan of Brendan Benson since 1996's One Mississippi, though I swear I misspell the band name every time I type it, even after nine years of fandom (Brandon Benson? Branden Bensen? An editor's nightmare). They put the power back into powerpop. Watching him/them perform live, I thought that Brendan's sinewy neck looks like a magical implement, and the spot-on glorious sounds emitting from said thyroid only substantiated my theory. With his wiry arms with body-builder like forearm and fingers (all the better to rip that guitar with, m'dear), the man is like an Olympian of music, a pop warrior, a melodic crusader.

Isn't it time to get yourself to a show?