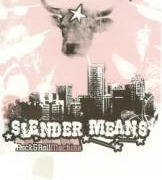 Slender Means released one of the best Seattle records of 2005 with their debut full-length record Neon & Ruin. As we noted in our (glowing) review of the record, Neon & Ruin was track-for-track a masterful collection of radio-friendly pop gems — if only the radio still played great pop music (KEXP being the obvious exception). Speaking of KEXP, the band went on to rank in the top 100 releases for the station that year, as well as placing #4 in the TIG Best Northwest Releases of 2005 reader's poll. Indeed, the Slender Means star was shining brightly, and it felt inevitable that the band was heading for great places.

Even then, the only criticism I had with Neon & Ruin was that it was a bit too perfect. It felt a bit reserved, as if the vocals and instrumentation were perfectly dressed for a first date, when really, you wished they would unbutton their shirt and revel at bit in the abandon of their own creativity. But like any intriguing first date/debut record, it felt like the band was THISCLOSE to really releasing their inhibitions and taking their sound to a place that would truly (pop) rock us.

It was with this great sense of expectancy that I approached this new EP, buzzing with excitement to *finally* have some new Slender Means songs — though the meager four songs (three new tracks and one live performance from a KEXP in-studio of a song from Neon & Ruin, "The Comet") seemed like a paltry return after two years. But no matter. After taking a dozen or so turns on the EP, it sounds like the band has failed to explode as hoped; instead, the EP has the band kinda…. stuck. It's not that the three new songs are bad. They're nice, and pretty. They simply sound like outtakes from Neon & Ruin, songs that would have sounded consistent on that record, but ones that would have had nothing particularly to add to the overall soundscape of the band… and ones that as a stand-alone EP fail to captivate as Neon & Ruin did.

"On the dole for the rest of my life, writing songs that nobody likes," croons frontman Joshua Dawson's on the opening track, "Fade Out." Probably not the most auspicious opening for an EP, and one that reviewers are bound to glom onto. The song is clearly the single of the EP and highlights one of the band's biggest strengths, the lustrous guitar work of Sonny Votolato, with his characteristically rich Rickenbacker tones that flavored their first record. The song is nice, Dawson's vocals remain as strong as ever, the song has hooks and nice productions, but still, there's just something… missing.

Track two, "Ship Wrecked," opens again with some pretty guitar melodies with nearly Latin undertones. The songs bobs along like a pop sea shanty, with Dawson returning to the refrain, "Water in my head, ship wrecked left for dead, you can't be sensitive, I'll return, I'll return." Again, a pretty tune, but it lacks the pop and general crushabilty of former songs like "Telepathetic Lovesick Heart" and "I Could Be Cruel".

On track three, "Foreign Legion," things change a smidge, as this number moves out of producer Martin Feveryear's hands (and studio) and into Joshua Dawson's. The song is a ballad with what sounds like a backing sampling track. Slowing it down doesn't really serve the band well; I'd like to have seem them step up and rock harder instead of mellowing into this rather lackluster number. The EP wraps up with the aforementioned "The Comet," also the closing song on Neon & Ruin, only this time the song is performed live on KEXP. The track clearly demonstrates what a consistently good band Slender Means is — not a note is missed during the live set — and it's so clean you can forget it's actually recorded live until you hear DJ Cheryl Waters chime in at the end of the song to thank the band. It's a treat for fans who've been following Slender Means live shows all these years for sure.

Again, the Rock & Roll Machine EP has its moments and all-around isn't a bad recording. There's plenty to like, and if this were my first time hearing the band, it certainly would have caught my ear. But having followed Slender Means for four+ years, I offer this challenge: fellas, we all know you have more in you than this EP has to offer. Bring it. Next time, blow it out of the park.