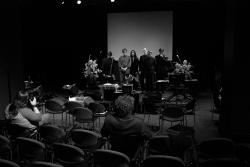 I don't know about you guys, but I miss mailing lists that like, actually sent you mail. Mail mail, you know, with a stamp. Preferably some bright colored cardstock that stood out from everything else in the mailbox, that held the keys to a fateful night when my favorite band nobody else on the planet gave two shits about would be coming through town. Wasn't that what we lived for? A moment taped to the wall in your bedroom, a single sentence in the liner notes of a cassette – a cassette for a band you sat on dirty floors and helped send out mailers for – that single sentence that, quite possibly, meant everything. It was secret, and sacred, and whole.

Before emails and texts, before cellphones and carphones, there were these pieces of cardstock that changed the very threads of our existence. And if you've got those moments taped to your walls, or stuffed in a shoebox, and you thought about setting them all on fire when you found out that little piece of your soul had been re-packaged to fit a commercial for a steakhouse or a hotel – well, then week two of the "Awesome" cycle at ACT is definitely for you. Shows Friday and Saturday at 8, and a repeat performance Saturday at 10:30. Even better: it's only $10 with a ticket stub from a previous show. There's so much more to say, but I don't want to spoil the party for any of you.

[Big, huge, gratuitous piles of thanks to Evan & the Awesome guys, along with Sean Nelson, for letting me attend and shoot the dress rehearsal tonight. It felt like I was in somebody's bedroom, that I wasn't supposed to be in. You know. In a good way.]