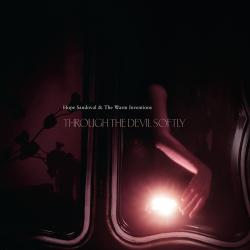 Through The Devil Softly

It’s been a terribly long time since Hope Sandoval released anything. Mazzy Star has been on hiatus since 1996, and the last time that the reclusive artist was heard from was in 2001, when her breathtaking solo record, Bavarian Fruit Bread, was issued. Finally, after years of silence, the chanteuse has appeared with another gorgeous collection of songs. Entitled Through The Devil Softly, her second solo release is just as impressive as her first, if not better.

The Warm Inventions this time around remains much the same. Colm O Ciosoig, best known as the drummer for My Bloody Valentine, once again plays a significant role in both the writing and performance on this LP. Sandoval sounds the same as always. Her instantly recognizable voice, with its trance inducing fragility, still sends shivers down the spine. Behind that, there is the music, a collection of somnambulistic lullabies that, instead of sedating the listener, manage to command the utmost attention to their delicate melodies.

“Blanchard,” the opening track and single, welcomes Sandoval back in style and provides the fix that has been missing since the release of her last recording. Waves of psychedelic electric guitars crash against woozy acoustic guitar. Meanwhile, primitive percussion keeps things in time. When the chorus arrives, some beautiful piano notes blanket the song seamlessly.

The trippy “For The Rest Of Your Life” is one of several standout tracks. The haunting vibes in particular are reminiscent of something from Pink Floyd’s A Saucerful of Secrets. The fantastic mix makes it even more intoxicating. In fact, this song sounds so drugged out that even sober it evokes some kind of altered consciousness.

“Thinking Like That” is a melancholy folk number that allows her vocals to perform their hypnotizing act. Midway through the track, somber violin adds the perfect amount of accompaniment necessary to augment the bare structure of the composition. It all sounds so natural, as if Hope and the band knew without trial and error rehearsals during these sessions where to keep things sparse and where to layer these songs accordingly.

Through The Devil Softly is, to be succinct, an amazing record. It lives up to expectations and becomes more engaging with successive listens. As if this isn’t enough, apparently Mazzy Star is recording the follow-up to 1996’s Among My Swan and is nearing completion. It will be interesting to see how well that material stands up to Sandoval’s solo work since she has proven twice now that her records are just as memorable as those released by Mazzy Star.