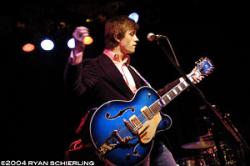 Emerging pop master Sondre Lerche's enchanting disc Two Way Monologue has been in heavy rotation at the embracey household since its early-March release date. The brief opening number, a lovely strings-and-horns instrumental called "Love You", is like the subtly melancholy, Bacharach-esque overture to a neo-classic film soundtrack. It's a perfect introduction to the lush and florid arrangements that follow, and Lerche's utterly charming delivery of his weirdly poetic lyrics make the album a brilliant piece of work: sophisticated, joyful, shimmering. I'm given a new thrill with each listen.

Last year I referred to Mr. Lerche as a "lil' Scandinavian-croonie cutie pie". And that he is. But now I realize he's so much more.

He played the Croc in late May with his band The Faces Down: fellow Norwegians Morten (bass), Ole (bass, backing vocals) and my new boyfriend Kato (guitar, pedal steel, backing vocals). Each looked as sweet as a piece of Scandinavian pie, and my date igLiz noted that collectively the group was like a sexy rock-n-roll IKEA catalog. "Even the guitarist's strap looks like it is from the miscellaneous kitchen section, right next to the potholders," she said. "IKEA should now market the Sondre™ luggage set."

As much as hot Kato's colorful guitar strap, form-fitting "HOWAYA?" t-shirt, lovely smile and sturdy Vikingness distracted me, it was ever-beguiling Sondre who owned the stage: every flash of an eye or hint of a smile was laced with easy charisma. He actually played solo on the first few easy-breezy songs, with a falsetto-tinged rendition of the smooth and compelling "It's Not Over" highlighting his vocal talents: polished, honest, never saccharine.

The Faces Down took the proceedings to a new dimension. "Till You Come Down" had Kato swaying his lovely hips to a twinkly guitar tune, and the dazzling twang of "Stupid Memory" was simply irresistible. (It's still my favorite track on the new CD.)

There were times when I missed the lovely orchestrations of the album versions, though. The current live version of "Sleep on Needles", for example, was a little rawk-y for my taste. But Two Way Monologue's title track, with its singsong hooks and Ivy-like harmonies, brought me back. And the dreamy, ghostlike guitar countermelody of concluding song "Maybe You've Gone" made for a perfect Lerche lullaby.