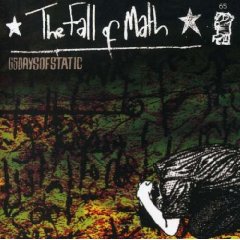 The Fall of Math

Fresh off the heels of a North American tour with The Cure, the UK instrumental group 65daysofstatic has finally had their first release, 2004's The Fall of Math, issued in the States. This album defines the band’s unique sound, one that is comprised of irregular rhythms that stretch through a range of styles encompassing rock and electronica. For the most part they have a modern progressive rock type of sound that relies on guitars and drumming in odd time signatures. The Fall of Math is at times dramatic and is occasionally straightforward, but is as a whole an original sounding disc that mainly lies in a classification of its own.

Most of the songs were recorded live in just four days, a feat of its own that is impressive for any band. The songs must have been well rehearsed and heavily road tested considering the complicated nature of the tunes. "Retreat! Retreat!" was an early single that has gone on to become their best-known song. It begins with some gusting keyboards and chiming bells before the guitars and drums arrive full force. The melody itself is anthemic, sounding almost as if it would fit in during some sequence in an action film. However, it is odd that this has become their definitive song because it is actually one of the most standard sounding rock songs on the album.

65daysofstatic is often lumped into the genre dubbed 'math rock,' which is characterized by complicated rhythmical structures. This description becomes apparent when listening to a song like "Hole" where the rapid drumming almost sounds like a programmed drum machine. This and other songs such as "The Cat is a Landmine" feature bizarre changes along with a variety of programmed ticks and noises. The rhythms are often augmented by scattered erratic analog samples throughout the record.

Other than the slow and somber "Fix the Sky a Little" and “Install a Beak in the Heart that Clucks Time in Arabic,” much of the music on The Fall of Math would be a strange accompaniment as opening music for The Cure’s often down tempo material because they tend to be a little more guitar heavy. That is not to say that this album is bad in the least, but they would probably fit better on the opening slot next to someone more aggressive such as Nine Inch Nails or Tool.