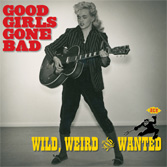 You're 17, you're signed to a record label, you have a sound, you have style, maybe you're poised to be the female Elvis (you have the hair for it), maybe you are poised to have a long Dollyesque career. Then, you get pregnant, it's 1958, and there aren't a whole lot of options for a girl in your position. So you fade into obscurity as you concentrate on your family.

In 1957, Sparkle Moore had more spunk 'n' punk attitude (including wearing leather, a guitar that was bigger than she was, and an Elvis-style pompadour) than any of the tough pop princesses knocking around today. With her five known recorded tracks (all of which are featured on the Ace release Good Girls Gone Bad, Wild Weird and Wanted), she was on her way to dominating the rockabilly world, already opening for Gene Vincent and with a scheduled appearance on the Grand Ol' Opry.

Sparkle quickly became one of my favorite singers after I discovered the Ace compilation at the used record store. She shouts, hiccups, shrieks, and coos through the song "Skull and Crossbones," repeating: "You should be labeled with a skull and crossbones, you're a jinx to my soul-ah."

Sparkle just oozes cool, and though I wish she cut more than five songs, at least I have these gems to rock-a-bop along to.

"I said, a big X means a-crossbones
My heart sighs, my heart moans
Then it cries and then it groans…………."