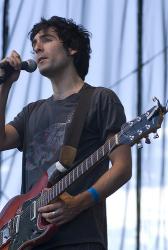 Honestly, I didn't pay a lot of attention to Blitzen Trapper at first (they were one of the TBA bands), since I hadn't intended on covering this band but suddenly, they got my attention. I sat up and took notice because the aural resemblance to Bob Dylan was just unreal. By the fourth song in the set they got a little heavier, but I still could not excape the Dylan-esque sound. It's uncanny – and the addition of the harmonica didn't hurt either. It's odd how the blending of two voices can come together and call to mind a singular music entity – is it on purpose? I couldn't tell.

A quick check of allmusic.com (to see if I was crazy) listed influences as Beck, Of Montreal, The Velvet Underground, and the Flaming Lips. I'm totally was not getting any of that experimental folk vibe. I really like this Southern infused, country-fried sound though, especially as a follow-up to the Grand Archives and in this quasi-pastoral setting. The band is multi-instrumental and had crazy energy up there, which was nice to see this early in the day, considering the warm weather.

They finally did get a little experimental-folky later in the set, busting out the maracas, cymbal-infused drums, and oh! cowbell! Lots of screamy, feedback-y organ too. Quickly they returned to that 70's southern feel, but then got totally psychedelic at the close, with lots of crashing drums, screaming guitars, and out-there organ screeching… then suddenly silence! Then those two voices come in a capella, lending a soothing quality after all that madness. Then they were southern again.

Overall, this was quite the schizophrenic set; this band is all over the map. Once I thought I had them figured out, they quickly shifted gears and surprised me again. The set closed with a mellow little charmer and then a little freak-folk tune, then finally a couple of nice loud jangly numbers. I found that I really enjoyed this band quite a bit and I'm glad to have seen them in this setting in particular.