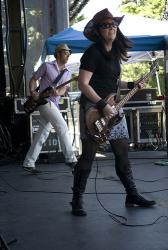 It's funny, but hearing Kinski start their set was actually a relief. After Grand Archives and Blitzen Trapper, we needed a different sound to knock us out of our dusty, heat-induced coma, a little wakeup call if you will. Kinski was in top form as always, good deep bass from Lucy Atkinson and nice screamy overlays from Chris Martin. The whole band showed great presence; it seemed like they were all well-rested and ready to just let us have it. Third song into the set, Kinski was already tearing the place a new one. Overall, when listening to Kinski I always feel like I've been projected into some kind of secret agent spy movie and we're at the big car chase scene on a mountain pass.

As usual, Kinski brought it down just a bit, a little respite before the onslaught and then, <BOOM>: bass, crunch, feedback – it felt so good. They played a few more songs with vocals than I'm used to but I didn't mind so much. They made good use of suspension tactics, pounding drums crashing like waves over us, a little homage to Sonic Youth, of course. That characteristic "wall of sound" was present, with a lot of sustained 2/4 pounding on the drums. At one point, drummer Dave Weeks removed a cymbal from his drum kit and rattled it around the stage, something I haven't seen before, drawing huge response from the sizeable crowd.

The big hit, "The Wives of Artie Shaw" is a staple in Kinski's live shows and it didn't disappoint today either. It's another secret-spy soundtrack song for me; I always enjoy it and today was no exception, with the classic screaming guitar notes. The band pulled out all the stops for this one, Matthew Schwartz even standing on a folding chair to belt out those crazy guitar licks. Of course, then they had to break it down again to that calm before the storm, take-a-deep-breath-it's-coming! formula before hitting us again with that deep, deep vibrating, cover your ears, fist-pumping craziness. The band was enjoying themselves immensely and had drawn a really large crowd at this point.

The rest of the set was more of the same speedy, black metal-infused blitzkreig coupled with that soothing black hole of bass. Above all the madness came that beautiful singular guitarwork that sounded like a voice, telling you a sweet story that everything was going to be all right. The storm was unleashed, and it was only 2:30 in the afternoon. I only wish the sky had opened up and rained fire and brimstone on us, but I guess the 80-degree heat was a good alternative.