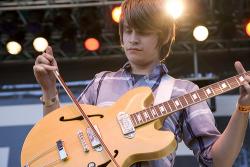 Oh, Fleet Foxes, dearest sweethearts of Seattle. From the first time I saw you at Capitol Hill Block Party, I was in love.

Even after seeing these guys at Sasquatch, I’m still weirded out every time I look out back and see J. Tillman on drums and not up front rocking a guitar. Nevertheless, the band’s dynamic works.

Later in their set, as the Fluid were sound-checking the drum snare for their set, Tillman launched into a quasi-metal drum-off of sorts. This little bit of unexpected comic in the set totally engaged the audience and is exactly the kind of thing that makes you fall in love with a band like the Fleet Foxes. The guys are just so freaking straight up.

Crowd favorite “White Winter Hymnal” set the audience off in a swaying tizzy, along with beauties such as "Ragged Wood" and "He Doesn’t Know Why." An honest and raw set, Fleet Foxes have never disappointed me. Their sound epitomizes Seattle folk. The conviction in Robin Pecknold’s voice alone when he sings with his ever-present vibrato with the supplementation of guitarist Skye Skjelset’s violin bow on guitar weeping makes for an unforgettable if not epic live performance.

I have yet to tire of their live show (I’ve seen them five times and counting), and though the layout and setup of their performances are predominantly similar, something new is to be heard every time they put on a show. The nuances in their songs and live show are more the reason to keep coming back for more.