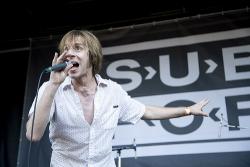 Just got done watching Mudhoney absolutely blow everyone else here today out of the water. I have a soft spot in my heart for this band — after all, they're one of the original "grunge" bands that brought Sub Pop to such notoriety. But they're fabulous for a reason. After all this time, they absolutely do not give a flying eff about how tuned their guitars are, how combed their hair is, or what they're wearing. They simply want to play music.

They started out blowing through a few tracks off the new, and highly fun, release The Lucky Ones {review}. Then it was in to a slew of old tracks, from "Sweet Young Thing" to "Touch Me I'm Sick" to "Into the Drink" — all just as though it was 1992 again. The new and old tunes so gracefully meshed against one another.

The last time I saw this band, it was at the Mercer Arena. Next to me was an in-disguise Eddie Vedder and his then-wife. We stood there in synchronicity, completely rollicking along with the band, stomping our feet, pounding our fists, and banging our heads along with the tunes. Fast forward to 2008 and not much has changed, though I didn't see Eddie in this audience (though I did have a sighting).

Despite celebrating their 20-year anniversary as a band, along with the label, Mudhoney is as youthful as ever. You'd never think they were an "old" Sub Pop band as they blazed through their set, full of piss and vinegar and loudness as they did in 1993. Frontman Mark Arm is a true acrobat, balancing on one foot, the other extended behind him, as he lunges forward to spew out gutteral, blistering screams.

During "Touch Me I'm Sick" and "In n Out of Grace," the crowd went absolutely apeshit, into hysterics. There may be distance between the time these tracks were recorded and now, but they still hold as much relevance as ever.

Best set of the night, in my mind.