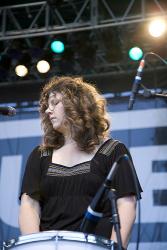 Low started immediately after The Fluid. I mean like, Within Seconds. I have to give Sub Pop major props for setting up two stages and running such a tight agenda; I've been to many many festivals and have never seen one so on schedule!

Low began with a mellow song (are there any other kind when it comes to this band?) that was quite simple and garnered a lot of good crowd appreciation. Second song was much the same, began simply but was full of that plaintive wail and singular drum sound we expect from Low. The haunting yet sweet style segued easily into a nice guitar crunch and suddenly, quite unexpectedly, they busted out the recognizable riff from Neil Young's "Southern Man," lending a nice Southern grunge sound to the whole song, which really translated well live.

Later in the set we were treated to some nice, landscape-y long vocals and simple guitar stylings. With Low, either the vocals are up-front, or the guitar totally takes over, almost like they take turns. At times, the vocals were completely front and center and plunged down to a single voice, then the guitar built back up into a swell and then subsided suddenly. It was gorgeous.

As the short set moved on, I was struck by how appropriate the slow, swollen sound was for this waning, dusty heat. As I moved to the front, I could see how very measured and studious the band really was as a unit; they were very together, with the two dudes on guitar and Mimi Parker on drums (mostly using mallets to produce that more muffled sound).

Their final two songs were quite sweet but also had an air of melancholy about them, a nice way to end the cohesive set and not even a bad way to introduce Mudhoney.