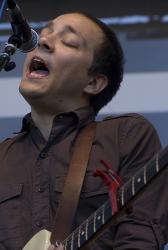 I am kind of obsessed with the Helio Sequence. If you even knew how many times I’ve been caught by complete strangers at red lights screaming along to various tracks off their most recently released album Keep Your Eyes Ahead, you would probably never talk to me again. The last time I had seen the Helio Sequence (excluding the KEXP in-studio) was on their support tour with Minus the Bear at the Showbox late last year, so it was good to finally see them in a live and open space like Marymoor again. True story — these guys make a lot of noise for two dudes. Nobody makes blips and mad math rock drumlines sound as good as these guys.

Drummer Benjamin Weikel drums with an élan so great, it makes it almost impossible to tear your eyes off him as he drums. The energy between vocalist Brandon Summer and Weikel onstage is so unbelievably transcendent. Their no-nonsense, “we’re going to deliver the music” is always a much appreciated mentality in festival sitations.

All my favorite tracks “Keep your Eyes Ahead,” “Can’t Say No,” and "Hallelujah” and more were performed. Even the blipping intro to “Hallelujah” is enough to induce me into a crazy and ugly fangirl state. Something about the refreshing, grin-inducing way the Helio Sequence pounds out their set completes me. If I never pinpoint what that thing is, it would be fine by me. It would just be all the more reason to keep seeing them every time they swing by the village trying to chase and define that feeling.