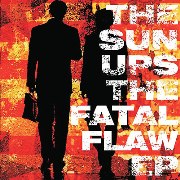 This is a five-song taste of a new power pop band that has a solid pedigree — Lucinda Kruy sung and played guitar with Luna Park and Dirty Bomb, and co-vocalist Brandy Foltz was in Dirty Bomb as well (and The Mellors, too), and Luna Park's bassist Arthur Hagman is here, too, with guitarist Matt Kramer from Kingpin Hayes, and drummer Kevin Bray from Delour and Wes Dando.

They've played shows with such quality bands as Slender Means and the Western States. They just had a show at Chop Suey with Hypatia Lake and Umber Sleeping, and will be playing the Rendezvous on September 21st.

It's hard to know when Lucinda is singing and when Brandy is singing, but seeing them live should help you figure that out. The point is, every song has wonderful interplay between them, as they trade off lyrics. The band is solid and Bray in particular keeps kicking up the energy behind the melodic vocal trade-offs, here shown best on the nervous noir-pop of the title track ("You are — you are — the fatal flaw in my design").

On "Arsenal," the band whips out imagery Elvis Costello would have used in his prime, about emotional bullets and intense queries about lovers' intentions ("Your eyes are like tiny daggers .your fingers . will I be cut down?"). Unfortunately, the smoothness of the vocals sometimes takes away from the power of the words. Lucinda and Brandy are fine as singers, but I'm not sure if I believe there's anything really at stake with what they're singing about.

As jaunty as these five songs are, I have the feeling it's still a little early for the band — that their best songs have yet to be written. Here's wishing them success long enough to do so.