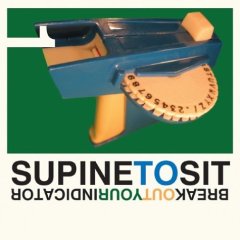 Break Out Your Indicator

It's hard not to use the media's ridiculous, contrived lingo when attempting to describe new bands. I promise I will not use the "Sunny Day Real Estate meets Pavement with a sprinkle of Minus the Bear" descriptions of late in this review, but I can't help but throw a math rock and cerebral pop reference when talking about Seattle's Supine to Sit. Forgive me.

Hailing from such bands as Roadside Monument, Sleepytime Trio and Pedro the Lion, Supine to Sit's debut album, Break Out your Indicator feels earnest yet ill at ease — like it's 1994 all over again and I am overwhelmed with the feeling of being frustrated in high school. I am reminded of that feeling of having all of the right retorts and comebacks to those fuckers that made my life miserable, but no real way of expressing that frustration successfully. I reminisce of the resulting retreat into "no one understands me" gloominess and my favorite Cure album. This album taps my angsty place from the distance of adulthood, allows me to remember why those years were formative, and makes me happy that I get to revisit them.

The complex chord progressions combined with the bittersweet vocals are like peas and carrots — they just make sense together. Drew's vocals are melancholy, but incredibly warm. The vocals combine with the richness and (dare I say) mathematical interweaving of Josh's solid bass foundation and Matt's stellar drumming to create a beautiful compound. The album's layers of pop perfection complement its more intense, "pissed off" morsels.

My favorite song on the album is "Presidential Hair." The range of emotions Drew goes through while telling his story is dramatic. He's desperate, angry and melancholy. Kind of like being 16, but with far more clarity and wisdom — which at times is a whole hell of a lot worse.