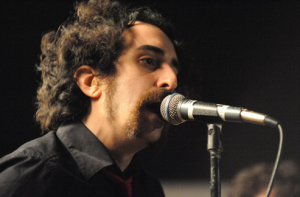 SXSW: A coming of age story…

Two days after a 37-hour drive to Boston from Austin, I am finally starting to allow the events of my first SXSW to sink into the wrinkles of my brain. My primary function for being there was to deal with my band affairs and play as many shows as possible, some in great settings, some in less great settings. So, unfortunately, I got to see relatively little music, but I did get a lot of opportunity to interact with the friendly folks who descended upon fair Austin for the week.

It's difficult to describe the overwhelming experience of being surrounded by people who dedicate their lives and energies to music. I am perhaps a musical grump, but by the end, I had heard some great things, made some new friends, and discovered that, if rock music is not dead yet, I hope it passes soon. I made the official public declaration that all music generated by guitarists with 4×12 cabinets and bassists with 8×10 cabinets has ceased to entertain me. I learned that Matt Pinfield and friends can't even express excitement without the cue card stating, "wow!" It became apparent that people would flock to the ends of lines at venues regardless of whether they knew what was going on inside. If there's a line, it must be worth waiting for!

We attempted to document the feel and experience to video as much as possible. This resulted in a collection of pointless, but sometimes compelling moments, as well as a few clips showing the fascinating process of meeting people on the street.

Today, I made my return to riding the subway in Boston and was dragged back into the reality of looking away after accidentally making eye contact with a fellow human, the immediate rejection of a stranger's greetings, and the general distrust for those nearby.

It's hard to know if humanity emerges only for festive occasions, but one thing I did learn is that strangers outside the Northeast are far more likely to take four sweaty troubadours into their homes and that meeting people at ATMs is easy.

We posted a large collection of videos from SXSW and our journey home. Here are a few that are likely to be of greater general interest (they are dull at moments):

She and Him (M. Ward and Zooey Deschanel)