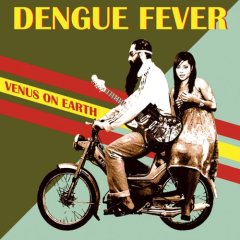 Dengue Fever's fusion of East and West is something magical. Singer Ch'hom Nimol hails from Cambodia, where she is a pop star in her own right; the rest of the bandmembers are American dudes. When Nimol sings in her native tongue, you may not know what she's saying but you can feel it. When she sings in English, you are charmed by her very audible accent. Either way, the backdrop of psychedelic funk rock with surf rhythms is heavy on Farfisa, sax, heart and soul.

Venus on Earth follows up 2005's remarkable Escape From Dragon House, and though overall the idea is the same, longtime fans of the band may find that the new album feels even more like something lost in time. It could have just as easily been recorded in the 1960s, though that's not to say that it sounds at all old or stale. It's simply classic, and quite alluring, and if you close your eyes you can almost picture yourself in a darkened lounge in southeast Asia, beaded curtains surrounding you, smoking a hookah while the band plays on into the night.

Of the 11 tracks on the album, only two are completely sung in English. Both of these ("Tiger Phone Card" and "Sober Driver") are duets between Nimol and guitarist & chief songwriter Zac Holtzman, on which they trade vocals back and forth conversationally: [Holtzman] "You live in Phnom Pehn" / [Nimol] "You live in New York City" / [together] "But I think about you so, so so, so much I forget to eat," begins "Tiger Phone Card," a song about the longing and loneliness of a very long-distance relationship. On "Sober Driver," Nimol begins with a sultry late-night call to her baby to come pick her up at a party, and Holtzman's response is the song's chorus: "You called me up because I'm sober and you wanted me to drive / I'm getting tired of being treated as just a free ride / I finally figured out that you're just a thorn in my side that's withered dull and dry." The chorus is incredibly hooky and the vocal harmonies exquisite, layered over dense instrumentation. "Tiger Phone Card" and "Sober Driver" are, at least to non-Cambodian speakers, the album's most accessible and catchy tracks, and the ones that listeners will initially gravitate towards.

But the remaining songs don't suffer from the language barrier. Nimol's voice, especially when singing in her own language, has a sweetness to it, and flows effortlessly along complex melody lines. Some songs have parts in English and parts in Cambodian, others are exclusively sung in Cambodian, but either way, every song on this album is rich and beautiful. Given their emotive quality and unique sound, it's no wonder that the band's songs have found their way onto many a television or movie soundtrack, including Jim Jarmusch's Broken Flowers starring Bill Murray, and Showtime's Weeds.

If you're a fan of Dengue Fever already, you'll not be disappointed by the new release, and you may even be pleased by the band's ability to reinvent themselves without taking a complete 180º. If you haven't heard this band, and you like music that breaks barriers and presents something fresh and unique, well hell, what are you waiting for?