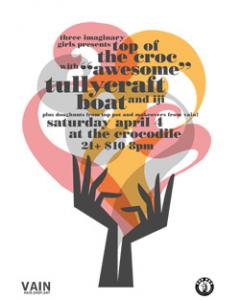 TIG presents: An imaginary pop celebration for the re-opening of the Crocodile

When the Crocodile first shuttered its doors in December of 2007, we felt like we'd lost a friend. Many moments of imaginary fun happened within those walls, and we missed it very much. That's why we're very excited to host Top of the Croc: An Imaginary Pop Celebration for the Re-Opening of the Crocodile!

We've lined up what we think are some of the best pop bands in Seattle for a night of serious imaginary fun on Saturday, April 4th 2009 , with Seattle pop notables "Awesome", Tullycraft, BOAT, and newcomers iji.

"I can't wait to share iji, who are kicking the night off! They are my favorite new band right now. They mix indie-pop hooks, DIY lo-fi, and coy disarming vocals — with horns, organ, and sometimes an autoharp" said Three Imaginary Girls co-founder imaginary Liz.

"As a newcomer to Seattle, I'm so excited to be able to experience such a vital part of this city's music scene with Three Imaginary Girls, and now with the reopening of the Crocodile. Honestly, it's so humbling to be able to have anything to do with the next stage of the Crocodile's presence, especially since it's my first exposure to it," said Three Imaginary Girls photographer (and recent Seattle transplant) imaginary Victoria.

"The Crocodile is a national landmark, or at least it should be. I gotta say it's been a really difficult year without having it around – it's like there's been a cloud hanging over the city as we followed the club's revival back to the world of the indie-living" said imaginary Liz.

Check back at www.ThreeImaginaryGirls.com in the coming weeks for more information on the show, the line-up, and the fun night ahead.