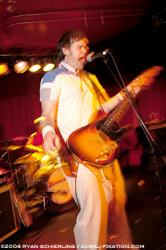 Tennis Pro at the Rendezvous

Tennis Pro is a zany, fun, crazy trio who layer lyrics about Bellingham, purple guitars and even {blushing} imaginary girls overtop hooks, hooks and more hooks. I had only seen TP {insert inappropriate giggle here} once before and was surprised that I remembered the lyrics to all of their songs. I would love to attribute this to my impeccable memory but I can't fool you imaginary reader, I can barely recollect my own age. My new found ability to recall every word to every Tennis Pro song after only one listen can only be chalked up to their massive skills in writing songs catchier than late night infomercial jingles.

When asked the infamous "Who's your favorite local band right now?" question I will inevitably have a different answer depending on the week and my mood that day. Lately, I haven't stuttered or taken a second to mentally weigh the hundreds of options floating through my brain. It's come out before I even have time to process it:

Their consistent use of "Oh, Ohhh's", "Nah, naaaah's", and "La, laddie, laaaah's" resemble Weezer and Get Set Go. Their stage attire resembles costuming for Royal Tennebaums – The Musical. These boys have more shtick than you can shake a shtick at. And oh boy, do they have a good time. Their happy attitude is more infectious than syphilis at the Cha Cha. The entire audience was giggling at their on stage antics, facial expressions and general corniness. David Drury {guitar, vocals} had problems with string breakage during the set. He finally confessed that he had a string breaking quota: "One string per song". I have no idea how they continued to sound so good and be in such a carefree mood when posed with this slight technical difficulty. {Hey, it worked for The Presidents of the United States of America}

Perhaps I was temporarily mesmerized by Sean Lowry's drum set. Not since the Stellastarr* show have I seen such a beautifully adorned drum kit. The logo on the bass drum was fun and brilliant, BRILLIANT, I say. Speaking of fun, I have no doubts that Phil Peterson {bass, backup vocals} was voted class clown in high school. If his hands weren't busy on the fret board, then they were undoubtedly up in the air, pointing to the ceiling while he made eye contact with the each audience member, banged his head and stuck out his tongue in rock defiance. He was the main reason I couldn't stop giggling the entire set. It's impossible not to celebrate when these charmers are on stage. I want to go to a party with Tennis Pro. Heck, I want to throw a party FOR Tennis Pro.

Oh, here's the website so you're not stuck sifting through hundreds of googled pages of Andrea Agassi. If those MP3's aren't enough TP for you, check out one of their shows April 16 or April 24 both at the Mars Bar. If you get a front row seat you just may end up with a tennis racquet splinter in your eye and if that's not cool, then I don't know what is.