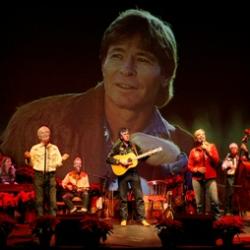 The Seattle Rep's Back Home Again: A John Denver Holiday Concert is a big disappointment, but it's happy-spirited and well-meaning enough to make you feel like a jerk if you (like me) don't buy into its cheesy, Branson-caliber charm. Unless you're on a mission to be a Grinch, it's best avoided.

Which is too bad, because the show's creators, Dan Wheetman and Randal Myler, created two similar Rep revues — Fire on the Mountain and It Ain't Nothin' but the Blues — both of which were energetic and moving and wonderful. And Wheetman is a seven-year veteran of John Denver's band. I'm not sure what went wrong with Back Home Again, but the spirit of everyone's favorite Colorado troubadour (and Miss Piggy crush) is nowhere to be found here.

Not that there isn't a lot of talent on the stage. Wheetman (banjo, guitar, mandolin, vocals) shines in most every performance (the Denver hit "Matthew" is particularly fine), and David Jackson kicks ass on the upright bass (his "Have Yourself a Merry Little Christmas" solo was my favorite number on opening night). Denny Brooks, another Denver band alum, is good at imitating Denver on vocals, but on opening night he dropped lyrics several times and even bumped his head on a mic once. (Maybe there was nog backstage.) Then there's Gail Bliss, another decent vocalist, but presence-wise she's pure Silver Dollar City.

Not even the set design — something I've never known the Rep to drop the ball on — is up to snuff, with its foil-wrapped, Safeway-looking poinsettias crowding what I guess is meant to look like a country barn interior. And don't get me started on the huge rear projections of (sometimes bitmapped, often too-low-res) Denver photos and wintertime vistas, most of which look like they were came straight from Google Image Search.

You might read the above and think Back Home Again worth checking out just for the trainwreck value. But trust me: stick to Dina Martina for that kind of fun.

And get your John Denver holiday nostalgia from YouTube.