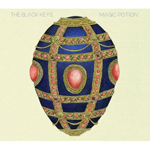 One of the greatest struggles of music critiquery (yes, I know I just made up that word) is attempting to evaluate bands as they age. Some bands strike out on their own and try new sounds, with varying success (e.g., U2 or Radiohead). Other bands keep their sound as constant as the tides, keeping their fans pleased until the end of time (think Weezer or the Cure). Both methods have their merits, but it is difficult to assess which either path is, well, the right one. Probably neither. It is like asking for direction and being told "head down the road until you reach the fork. Then, take the fork." That is about as far as I can get with this before my head starts to hurt.

The Black Keys, case in point, clearly fall into the "consistency" camp. Therein lies the struggle for me, as a critic. I really like the Black Keys sound: the fact that I can pop in any Black Keys album and know what I can expect can be very comforting; it's the musical equivalent of comfort food. So, how do you evaluate something that you don't want to change in the first place? On their fourth length album, Magic Potion, the Black Keys are exactly where you would expect to find them: playing their blues-rooted rock and rock, rumbling and growling their way through the songs like rock stopped evolving after Led Zeppelin. However, even though I can put Magic Potion in my CD player and feel completely comfortable with it, I can't help shake the idea that, maybe, someday, the Black Keys might think of trying something new. Overspeciallization can be a bitch.

That being said, Magic Potion gives Black Keys fans exactly what they want. Right from crashing of Dan Auerbach's guitar and Patrick Carney's drums opening "Just Got To Be," you get song after song of guitar-rich rock. It almost makes it difficult to describe a lot about the album because each song is constructed so similar, right down to the themes of women, love and lust. Some of the standout tracks that follow this formula are "Just a Little Heat" that oscillates from growling, low vocals and drums to a full on thunder, "Give Your Heart Away," a song that approaches the all out roar of their previous albums and "Modern Times."

If anything unpleasant can be said about Magic Potion, it is that it feels like it lacks some of the intensity of earlier, rawer Black Keys albums. "Your Touch" and "Goodbye Babylon" follows the blues formula of longing for a woman, with Auerbach's gruff vocals taking it home but lacks some of the fire of earlier sultry Black Keys songs like thickfreakness's "Hold Me In Your Arms," as if the band is holding it back. These songs begin to have a "by the numbers" feel that is dangerous territory for a fairly straightforward duo like the Black Keys.

One of the nice deviations from the modus operandi is You're the One, a quiet ballad where Auerbach's vocals are more subdued and nuanced, echoing over the reserved guitar. It adds a little more variety to the Black Keys oeuvre. "The Flame" also has more of this smoldering sound, albeit a little closer to your typical Keys sound. The album does close s trongly, with the boisterous "Black Door" and "Elevator," two songs that feel like the Black Keys just letting the studio fill with their sound and not worrying about taking anything down any notches.

Magic Potion seems to prove the axiom "the most things stay the same, the more they stay the same." Ok, well, maybe that's not an axiom, but that's the point here. There are some subtle variations from the rest of the Black Keys discography, mainly in that they sound a little more polished, a little more subdued at times, but unless you've listened to the Keys as much as someone like, well, me, you're probably not going to notice. So, Magic Potion becomes one of those albums that isn't going to change anyone's mind about the Black Keys, but if you like what you're heard so far, you're not going to be disappointed.