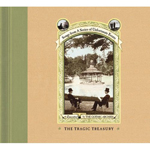 The Tragic Treasury: Songs from a Series of Unfortunate Events

It's almost amusing sometimes how many "bands" somehow feature Stephin Merritt. At last count we have Magnetic Fields, the 6ths, Future Bible Heroes, Stephin Merritt (solo) and the Gothic Archies, and really, they all blend into one beautiful Merritt menagerie. The Gothic Archies are the center of Merritt's latest opus and it's a doozy. If you can get Jim Carrey out of your head for a moment, it seems a perfect fit to combine the quirky darkness of the Gothic Archies (self-proclaimed goth-bubble-pop, kind of like a Tullycraft-meets-Edgar Allan Poe) with Lemony Snicket's Series of Unfortunate Events. This match made in heaven (or maybe hell) has produced a Tragic Treasury, where we get macabre tales set to downright lovely tunes.

For anyone who has listened to Magnetic Fields' 69 Love Songs (and if you haven't, do it now. I'll wait here for you…), you know that one of Merritt's many skills is the ability to morph genres with incredible ease, and the Gothic Archies are no exception. They (well, "they") might advertise as bubble-gum pop, but the sounds on A Tragic Treasury jump from Decemberist-like shanties like "Scream and Run Away" to actual dance songs like "The World is a Very Scary Place" to dirges like "Things are Not What They Appear". Although the tales of Lemony Snicket do lend themselves to such dark and funeral march-like songs (see also "Dreary, Dreary"), it is the more fun-loving songs that make the Treasury so enjoyable. "Scream and Run Away" sounds like what you might here in the town bazaar being in the middle ages, warning visitors of the evil Count Olaf. The same can be said for the only song not directly related to the collection, "We are the Gothic Archies," a goth 60's pop song (more or less) that introduces us to the band and makes me wish that someone would start making a cartoon series that chronicles the adventures of Archies (Adult Swim are you listening?) There is a child-like playfulness to "In the Reptile Room" even as Merritt sings in the reptile room/where the babies scream, and really, who doesn't enjoy such musical contradictions?

It is the odd sweetness of a lot of the tracks that makes you realize how the marriage of Merritt and Snicket really is. "This Abyss" is an odd love song with undeniable optimism as he sings even in the deepest ocean/is a little moonlight over criss-crossing synthesizers. "Crows," on the other hand, has a darker tone with guitars crashing over the chorus there are crows, crows, crows everywhere/but when I think of you dear, I don't care. Admittedly, when you're writing an album about every Snicket book, it can get a little bogged down with songs that just don't seem to get their act together (e.g., "A Million Mushrooms", "Freakshow") and "Smile! Nobody Cares How You Feel" is a gem merely on its title but you wish the song would have a few more teeth. Luckily the engaging songs make up for it, like the real gem "Shipwrecked," which might be the ultimate love song. Regaling us with a tale of being shipwrecked on a tropical island with your love. Merritt mixes sarcastic wit like suggesting being shipwrecked means we can quit smoking and quickly lose weight and romantic gestures like if it looks drizzly I'll build us a yurt. It slowly becomes clear the deranged notions that take over the minds of the castaways (what shall we use for bait?/lend me a hand/I'll sew it back when we get to land). It is pure ghoulish perfection set to a hollow, strangely tropical melody.

If anything is a failing of The Tragic Treasury in the Stephin Merritt oeuvre, it's the overall fluff feeling of the album, but it's a "soundtrack" for children's books, so it can all be forgiven. The Gothic Archies continues to show that Merritt in whatever form can craft entirely delightful pop gems on almost any subject matter. And really, how often do you get to sit back and enjoy catchy songs about ghastly death?