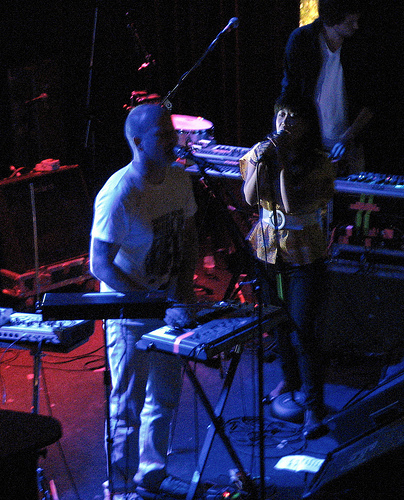 Win tickets to see The Juan MacLean at Nectar 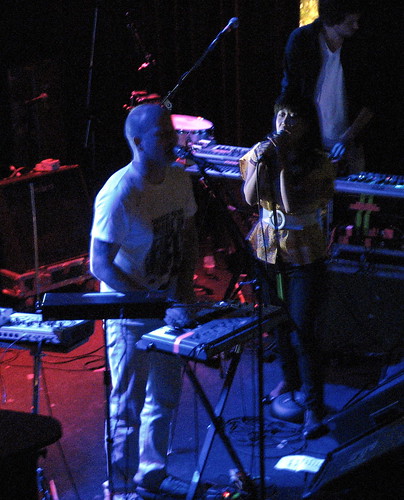 {Photo of The Juan MacLean by Jeanine Anderson}

I'm getting quite excited for The Juan MacLean's return to Seattle, following the release of their latest album, The Future Will Come. Last time the DFA band, led by Juan MacLean and Nancy Whang played at Nectar I wrote:

The big difference is in their sets is the equipment. The Juan MacLean’s setup was MacLean on a synthesizer (and theremin), another band member playing a synth as well, Nicholas Millhiser and there was a live drummer, Jerry Fuchs. Singer Nancy Whang (who is also, not coincidentally, also in LCD Soundsystem) completes the lineup.

For the hour-long set, MacLean and his band went through a lot of the songs he’s become known for (from the 2005 album Less Than Human) like “Give Me Every Little Thing” and “Tito’s Way”. MacLean and Whang shared singing responsibilities, with her emotion and range making a nice contrast with MacLean’s robotic, Depeche Mode-like harmonies. The true showstopper was the final number, “Happy House”. The song was released in March as a single and is about 12 minutes long on record. Just as they were breaking into the final song, MacLean and Whang joked about not knowing the song and just winging it. They seemed to have a lot of fun playing that number more than any other. The song’s beat continuously built up and slowed down and seemed to blissfully go on forever. It almost certainly exceeded the running time of the recorded version of this song.

On Monday, June 8, The Juan MacLean will return to Nectar on a co-headlining tour with The Field. Tickets are $15 – and worth it – but even better: we have a pair of tickets to give away to one of our lucky readers. To enter, just send an e-mail to [email protected] before Wednesday, June 3 with "Juan MacLean" in the subject line. The winner will be notified shortly thereafter.

Here's the video to the first single from The Future Will Come, "One Day". This video was directed by Patrick Longstreth.