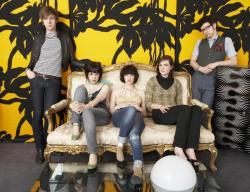 The Long Blondes at Neumo's

In the immortal words of Yogi Berra, it felt like déjà vu all over again.

It was a mid-week night and I was at Neumo’s watching a female-fronted rock band from the British Isles with an excellent 2008 album and that has a beautiful lead singer with short, dark hair wearing a light blue, one piece dress, all before a criminally under-attended show.

It was almost a month to the day before the similar Sons and Daughters show, but the Long Blondes were no less enjoyable.

Lead blonde Kate Jackson told the audience early on that this was the band’s first trip to Seattle (but their fourth time in the US) but praised our hospitality for helping fix their touring van and giving them drinks. Yet, even Radiohead can’t get by on politeness alone. If you can’t (or don’t) rock, pleases and thank you’s can only take you so far in this business. But that didn’t matter this Wednesday night.

Playing almost an even selection of songs from the band’s two albums, Someone to Drive You Home and ”Couples," the band definitely rocked the small crowd this evening.

They played the songs as straightforward rock fare. That meant that they lost some of the disco/dance elements on songs from ”Couples” like “Century” and “Guilt” and the reverb drowned out the sensuality from “Round the Hairpin” but I still enjoyed the show overall. Maybe turning down the synths and turning up the guitars on “Century” and “Guilty” weren’t the worst possible ideas because those songs do sound awkward and interrupt the continuity of all of the other songs in their catalogue. They are best when they are a rock band, not a disco band (like, say, Client). I’m not against taking risks but on “Couples,” it just feels like they’re shooting for a dance club hit.

On stage, though, Kate Jackson is a femme fatale. She danced around the Neumo’s stage in a pair of stilettos that could be used as a deadly weapon and controlled the sexual tension of everyone in the room, male or female. It is probably not a coincidence that the first album, Someone to Drive You Home features a painting by Jackson of Faye Dunaway in Bonnie and Clyde, the ultimate on-screen femme fatale: cool, smoldering and murderous. She also name drops model Erin O’Connor and movie stars like Edie Sedgwick in her songs.

While Jackson was every bit the rock star, bassist Reenie Hollis looked visibly bored – like rocking was a day job and she’d rather be elsewhere. It may have been because Jackson commands all the attention in the room or not quite feeling comfortable on stage or exhaustion from the tour or deep concentration but she was still on point and hit all of the right chords.

The band played for around an hour and I didn’t notice any significant exodus as the night dragged on (and passed midnight).

The middle band, 17th Chapter, while a mediocre but competent rock band, earned some major bonus points when their lead guitarist and bassist both wore t-shirts during the show of the first band, Seattle’s own (and, full disclosure, my friends) Ms. Led.

Still, Kate Jackson and the Long Blondes (not a blonde in the band) were the stars of the night. There were about a hundred people or so there and I’m sure everyone felt sufficiently rocked before we all had to go back to our less glamorous jobs Thursday morning.