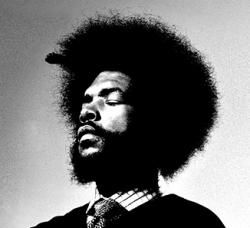 The Roots at the Paramount

The day after The Roots’ excellent show at the Paramount, I’m having trouble reading my notes from the evening. So far, all I can read is “?uestlove is one cool motherfucker.” That may be all you really need to know about The Roots and their show Thursday night. But I’ll elaborate.

The openers for this show were Pacific Division, an LA-based hip hop crew of three emcees and one DJ. They were acceptable but not terribly good. Their entire 30 minute set was over-rehearsed and nothing seemed spontaneous. The beats and rhymes were both generic and didn’t work together. I felt like the DJ and emcees were not in synch with one another. It felt very amateurish. The contrast, though, showed just how great The Roots were. Maybe it was intentional.

The Roots, on the other hand, were professional and pretty terrific overall. Even the non-partisan Wikipedia says “their live shows have frequently been hailed as the best in the genre.” When they came out just a few minutes after 9pm, the band was led by a tuba player, who they call “Tuba Gooding, Jr.” Throughout the hour and a half, the legendary hip hop band played like one of the best rock or funk groups, playing hip hop.

The Paramount was pretty full with people but not quite a sell out, but the crowd was pretty diverse, with hip hop fans and NPR listeners in the same room. They played some riffs from some familiar stuff, like “Jungle Boogie” and “Sweet Child O’ Mine” but mostly stuck to their own material, led mostly by emcee Black Thought’s rhymes. On one song, Black Thought asked if we were familiar with its inspiration, Afro-pop legend Fela Kuti.

Playing drums on a slightly elevated stage with a huge drumkit, ?uestlove’s stage presence was dominant. He’s a large guy with a big afro, so he’s pretty hard to miss. Watching him, he reminds you of a jazz drummer. He’s not flashy but he keeps time, never misses a beat and looks cool doing it. On stage he just seems like the type of guy who never breaks a sweat.

For 90 minutes, The Roots got the Paramount crowd dancing to their hip hop. At one point, about half an hour into the set, ?uestlove and F. Knuckles had a sort of drum-off. It wasn’t competitive, though, but showed the drummer and percussionist in harmony with one another. They also gave Tuba Gooding Jr. an extended solo. After the show, my friend and +1 said “I think there needs to be more tuba in hip hop” and, while kidding, seemed on point, too.

The Roots are the cool kids who make everyone around them cooler. Case in point, they’re the house band on “Late Night with Jimmy Fallon”, and Jimmy Fallon is on television and he shouldn’t be cool enough to have The Roots as his band, yet somehow he seems cooler because of it. Another cool thing The Roots are doing: backing Public Enemy at The Roots’ own picnic while PE plays their masterpiece It Takes a Nation of Millions to Hold Us Back” this summer. They’re also one of the headliners on the Rock the Bells tour this summer.

In a sense, The Roots are all things to all people. They’re often a rock or funk band working in a hip hop medium. For most of the set, the crowd seemed to really dig The Roots, cheering and dancing when it was appropriate – except for maybe the handful of people that got busted for smoking pot at the show.