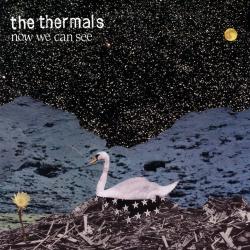 Now We Can See

The fourth full length from the Thermals starts out with a swaggering rocker (including the classic away from the microphone scream) about shedding your human self and becoming an invertibrate ("When I Died"). This sets the tone for an album that seems to be about pouring gasoline on your life and tossing a lit cigarette on the pile. Such is a feeling that shows up on many songs, such as "I Let It Go" ("I looked my fear in the eyes/I looked at the water below/I knew I could love or die/I let it go"). This is an album that feels like jumping off a cliff just to see what would happen – a pop album about renewal of the purest parts of oneself.

This is not to say that there is so much self-renascence that this is not a Thermals album. Now We Can See is about rebirth, but the Thermals have not lost their pattened formula for short and quick-out-of-the-gate anthems to make the kids go crazy. What we are looking at is a clearer-headed and more healthy (sober?) Thermals ("We Were Sick", "Liquid In, Liquid Out"), ready to take over the world. I'd like to be the first to state it – this is the album that will make them famous. The songs are catchy and easier to remember. They get stuck in your head more than ever before (and this time some songs even have Kathy Foster backup vocals!). And unlike their (masterpiece) first album, More Parts Per Million, every song has a chorus and is long enough to repeat several times, making it easier for the average joe to chant along. "How We Fade" sounds like it would fit perfectly on your average alt-rock radio station and even the Nickelback fans would think that it rocked.

This is not meant to be criticism. I think this album is incredibly strong, and I'm not one of those fans that turns on a band when they get famous. In "When We Were Alive", Hutch Harris screams "You should of seen us in our prime!". Dear Hutch, we did, and you're not past it yet.