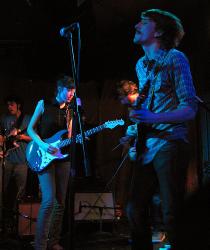 The Ruby Suns and Le Loup at Chop Suey

I went to Chop Suey to see the Ruby Suns, but left in love/lust with Le Loup. Both bands far exceeded my expectations for the night, and I pity the fool who couldn't make it out. Loaded with Sub Pop employees there to support two of their newestsignees, Chop Suey was appropriately crowded and sufficiently ready for a rockin', party poppin' good time.

The Ruby Suns new album out on Sub Pop, Sea Lions, is dreamy in a faraway land kind of way and raucous in a no holds barred, jangly Animal Collective way. Their album is really good, but their live show trumped it in more ways than one. Two thirds of the three-part band clambered on stage wearing shiny tights and thrift store tees, with one of the female members sporting a tribal style necklace with bones hanging askew. Flute trills and trickling water sounds started off their set, accompanied by lead Ryan McPhun on guitar and vocals. They quickly broke into a feverish flurry of jumping and drumming, at times reminiscent of a frantic and complex Velvet Underground. Their New Zealand origins were portrayed by a definite drum-driven Maori tribe-influenced air with hints of sunny Beach Boys melodies. At times ramshackle, amusing, and often pleasantly drony, the Ruby Suns brought their A-game. Their creativity and propensity for jammy art-rock drew the crowd in person by person until Chop Suey was a sea of nodding heads.

The Ruby Suns were appropriately matched with another Sub Pop/Hardly Art band, DC-based Le Loup. It was hard to tell exactly how many members they had on stage, but I believe seven were present. Le Loup aren't a strictly guitar-bass-drums-keyboard band. They made good use of auxiliary instruments, which in my opinion often add a little extra oomph to a band's sound. Rocking a french horn, the occasional tambourine, vox, and a banjo, Le Loup brought us atmospheric indie rock belaying the Books or a hand-clapping Tunng. They were much more than that, with swelling mid-song instrumentation a la Explosions in the Sky and a blasting french horn that sounded EXACTLY (and pleasantly) like an elephant shrilly neighing.

Lead man Sam Sminkoff has stage energy. He has a presence and a sincerity in his approach that reels you into his red-faced antics. Their sound is infectious, engaging, and mind-numbingly good; it pounds in and waves out, building up and releasing with crashing ride cymbals and breathy Panda Bear-esque vocals. Their sound is tumultuous and raging, the rhythms carefully calculated and the singing exuberant. Le Loup was the shit, lifting everyone up and inspiring quite a few spry dance moves. Le Loup is intimate and vitally NOW.

Le Loup's show, along with the Ruby Suns, made me believe in seeing bands live again – the mark of a truly great performance.