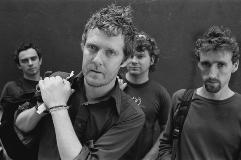 Tonight's Recommended Show: The Frames, Dolorean at the Showbox

Watch out kids, there is another Dublin band worth worshiping. The Frames have earned the critical accolades and fans with their intimate rock that raises the bar. They were even voted Best Irish Band in 2004. As an added bonus to their solid six-album catalog(ue), they've been known to belt out the occasional cover song… specifically Johnny Cash's "Ring of Fire" and Jane's Addition's "Jane Says" giving each song the frenetic, heart wrenching flavor The Frames are famous the world over (even if the US isn't quite aware of it or not).

Of course, all that banter with the thick Irish accent doesn't hurt either.