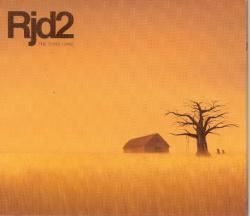 There has been much scrutiny since RJD2 declared hip-hoppery as he knew it banished from his shelves so he could pick up a guitar and croon about the typical trappings of life like the myriad of other indie groups out there. And yes, it has thrown many of his hardcore fans for a loop because when artists leave what they were famous for, most people don't seem to understand why. I think the initial reaction of confusion is allowed, but what about the new? Change is something we usually cannot deal with. It at first is creepy and unfamiliar, until we give it a chance … or at least, like most things, get used to it and give it time to grow.

But the thing about RJD2's The Third Hand is that if you look closely, RJD2's brilliance with beats is still as fresh as ever. He hasn't given it up, he's only trying to refine it. You just might have to listen a little harder. "Take it easy," he sings on the track "Work it out," "I got this / I got this." Let's just hope he does.

I took another listen to RJD2's first album Deadringer after listening to The Third Hand and felt nostalgic for his first album's power and ferocity. No song on RJD2's third album comes close to the urgency and musical prowess of "Cut out to FL" and "Ghostwriter," songs that showcase RJD2's craft (his turntable skills are unfounded) for being that mash-up kingpin that makes nodding along to his music a simple joy.

The Third Hand isn't disappointing though because it throws you a few nuggets of goodness and the album, although lacking cohesion, is a good mix of regular indie-band melodies and ambient 80s-inspired rhythms. "Murs Beat" and "Laws of the Gods" are two examples that RJD2 can say anything he wants about hip-hop, it'll always shadow his music … maybe for the rest of his career.