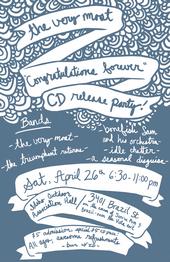 New band crush: The Very Most

I have a new swoony favorite indie-pop sorta local band crush. They're called The Very Most, they're from Boise, Idaho (we can claim Idaho bands as Northwest bands, right?), and they play charming, polished, quaint indie-pop that'll warm you to the cockles of your heart. Influences include the Beach Boys, Belle and Sebastian, Quasi, the Smiths, and another famous band out of Boise, Built to Spill.

The band will celebrate the release of its second record, Congratulations Forever, in their hometown at the Idaho Outdoor Association Hall (doesn't that just sound cute?), with the Triumphant Returns, Bonefish Sam and His Orchestra, Idle Chatter, and A Seasonal Disguise. Your $5 ticket gets you all that music and some baked goods.

Congratulations Forever releases on April 26th, but you can hear a few tracks from it now:

A bit of The Very Most music trivia for you: the title for the record came from frontman Jeremy's sister Rachael, who used to play with the band till she moved to Portland, where she now plays with the Parenthetical Girls.

The band hopes to play Seattle and Portland later this summer. I'm gonna keep my eyes out for that tour date!