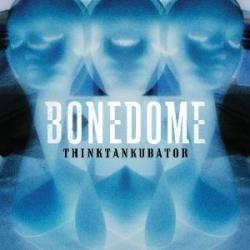 Here is a curious new release. Judging from the artwork, the new CD by Bonedome resembles a 1990s industrial genre cover, something from one of those heavier acts such as Frontline Assembly. The music that spills forth from your speakers or headphones, however, is quite different from what was expected by the packaging, save for the fast and furious rock and roll songwriting which often sonically resembles characteristic recordings from that decade. Thinktankubator is an immediate rock album that is loud, but also concentrates on melody and is thus up-tempo enough to obscure the grunge sound of the guitar driven songs.

Most of the tracks are succinct numbers that don’t waste time on build-ups or changes in dynamics. “Steven” begins with some distorted bass akin to something from Pixies’ Doolittle. The electric guitar playing is rather different though. It sounds more like mid-period Smashing Pumpkins. “Eraser” is an acoustic ballad that recalls The Bends era Radiohead in certain ways. “Fade Away” sounds like it would be the single as it comes across as a crossbreed between The Afghan Whigs and The Rolling Stones.

Bonedome has spent what sounds like a lot of time perfecting the sound in Thinktankubator. The production is polished and clear without sounding overproduced and the songs are thick with crisp musical resonance and often multi-tracked vocals. If the marriage between 1990s influences and current recording technology is what they were going for, then this album has hit its target straight on.