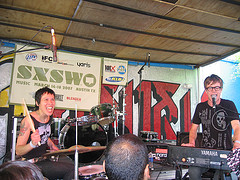 Today's super busy at the dayjob. I could say that it's the busiest day at work all year (if such a statement didn't kinda freak me out and if I didn't think that the next few days were going to be busier).

The only thing that's keeping me from wallowing in self-pity (and not be tempted by the Mike's Hard Lemonade they serve down the street at the Taco Del Mar) is the reminder that there's stuff like the NEW Matt & Kim album coming out soon (Grand, on RCRD LBL). Such news keeps me on track — freaking out about much more important things.

And the steady topper? They posted a NEW song from that forthcoming album (their first release in two years) for us (or just me) to play on repeat: "Good Ol Fashion Nightmare" (download it here)

And to accompany the song, Matt posted a lil note to us:

TWO YEARS it’s been, flew by just like THAT! (*snap). In those two years we’ve been lucky enough to have traveled all over this planet, and eat hot dogs (veggie dogs) in Chicago, shot guns at beer cans in Alaska, and see a bikini babe with a giant KORN lower back tattoo in Australia (with the backwards R and everything.) but in those two years, with all the KORN tattoos and what not to see, we haven’t had the chance to release any new songs… Well, finally that will no longer be the case. On Monday we’re pre-releasing a song from an album we’ve been working on for the past number of months. The song’s called GOOD OL’ FASHION NIGHTMARE from the album we’re calling GRAND. Starting Monday you’ll be able to download it for FREE from rcrdlbl.com. Just wanted to give you a heads up cause we’re so, super, freakin, stoked about it.
Hope all is rippin.
-matt

So sweet and cute. Those Matts and Kims are workin' hard for *us*.

Obviously I'm super stoked for the full-length — what other albums are slated for fall release that we should be counting down to?