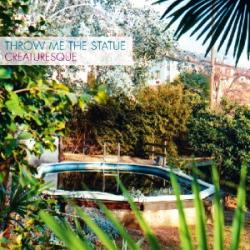 Throw Me The Statue- Creaturesque

Throw Me The Statue has had a steep learning curve. Releasing their first LP, Moonbeams, on Scott Reitherman’s local Seattle label, Baskerville Hill Records, they recently signed with the Indiana based independent label, Secretly Canadian, for their sophomore full length release, Creaturesque. Weaving together pop, rock, and a slew of influences, Creaturesque is redolent of an estranged lover’s pheromones lingering on a hand-me-down T-shirt.

In an interview with The Line Of Best Fit, Scott Rietherman commented on recently joining the impressive collection of bands on Secretly Canadian. He sees Jens Lekman’s pop presence on the label encouraging as a niche for Throw Me The Statue to fit into Secretly Canadian’s roster. Opening track, “Waving at the Shore,” hearkens to Lekman’s love of horns and handclaps, setting a light-hearted tone at the outset of the album. However, this incredibly upbeat pop song feels like an outlier to the rest of the album, only hinting at the overwhelming mnemonic mood of Creaturesque, during the more introspective verses.

Initially the subtle schizophrenia between songs felt like the product of a band whose sound is undefined and overly referential especially when listening to the blatantly Built to Spill-inspired “Hi-fi Goon,” followed by “Baby You’re Bored” which strays into Neutral Milk Hotel territory. However, the construction of this album and the songs that comprise it reveals its skilled craft on “Noises,” the bumpy backbone of the 12 tracks. It’s pared down instrumentation and a vocal melody that follows the electric guitar rhythm and the plunks of the sometimes sweet, sometimes electro keyboard, defines the general structure of TMS’s song writing.

The song serves as an index to the idiosyncrasies of Creaturesque whose tunes range from a Mountain Goats lo-fi moog feeling on “Snowshoes” to the heavily produced horns and distorted guitars on “Dizzy From the Fall” that, following each other, manage to combine to create a consistently solid album that is never redundant. The overarching theme can be summarized by the lyric, “to make the trip back home, to think to smell dads clothes, go through his rock and roll. Oh world, it’s you who turns us old,” on “Ancestors.” This manages to sum up the feeling of nostalgia that creates the wistful yearning you’ll have for these songs.

The album is subtle yet catchy, at once hopeful and bittersweet, it’s tightly wound pop songs expanding to fill your head. Start charging Throw Me The Statue rent for the mental space they’ll comprise between your ear-buds as the days get shorter and the leaves start to turn.