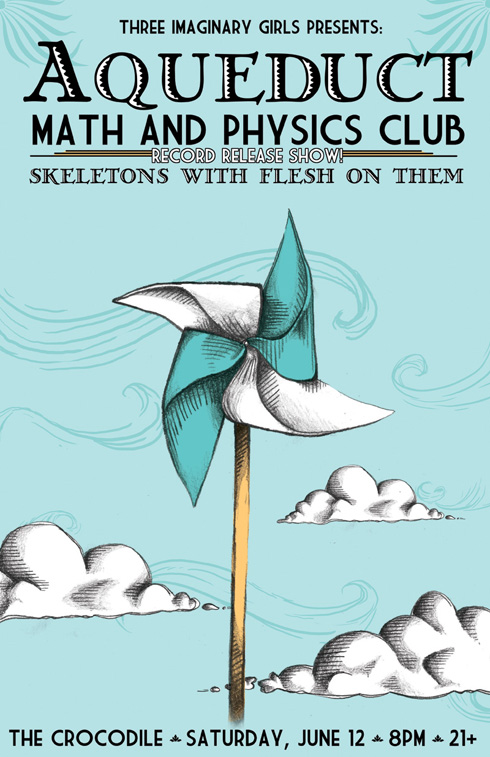 TIG presents: Aqueduct, Math & Physics Club {album release}, and Skeletons with Flesh on Them at the Crocodile on June 12

Join us as we celebrate our EIGHTH imaginary birthday and the release of Math & Physics Club’s new album with a showcase of a few of Seattle’s best indie bands at the Crocodile on Saturday, June 12!

Here’s the info with which to mark your calendars:

If you’re under 21 or just want to get a sneak listen to the new Math & Physics Club album, join us at our Crafty Imaginary Listening Party on Sunday, May 23, 2010 at Neptune Coffee.

MORE ABOUT THE AWESOME BANDS!

Aqueduct
Aqueduct is the hip kid’s alternative to mainstream fluffy pop. The band’s brand of indie-pop is smart, full of feel good lyrics spiced up with the right amount of “fuck” and “bitch” to keep things less sucrose and more mature.”
{Aqueduct on TIG} {website} {MP3s}

Math & Physics Club
With the release of their first EPs in 2005 and debut album in 2006, Math & Physics Club joined the ranks of the Seattle Twee Society with their blend of the Lucksmiths, Belle + Sebastian + Magnetic Fields. Their elegant and polite songs disarm both the smitten and the lonely hearts amongst us and have been known to inspire group hugs. The new record, their second LP entitled I Shouldn’t Look As Good As I Do on Matinee Records, amps up the signature MAPC song structure with a comfortable confidence. The lyrics no longer dance around the subject and the rhythm section turn power pop in parts. And the handclaps are great too.
{Math & Physics Club on TIG} {website} {MP3s}