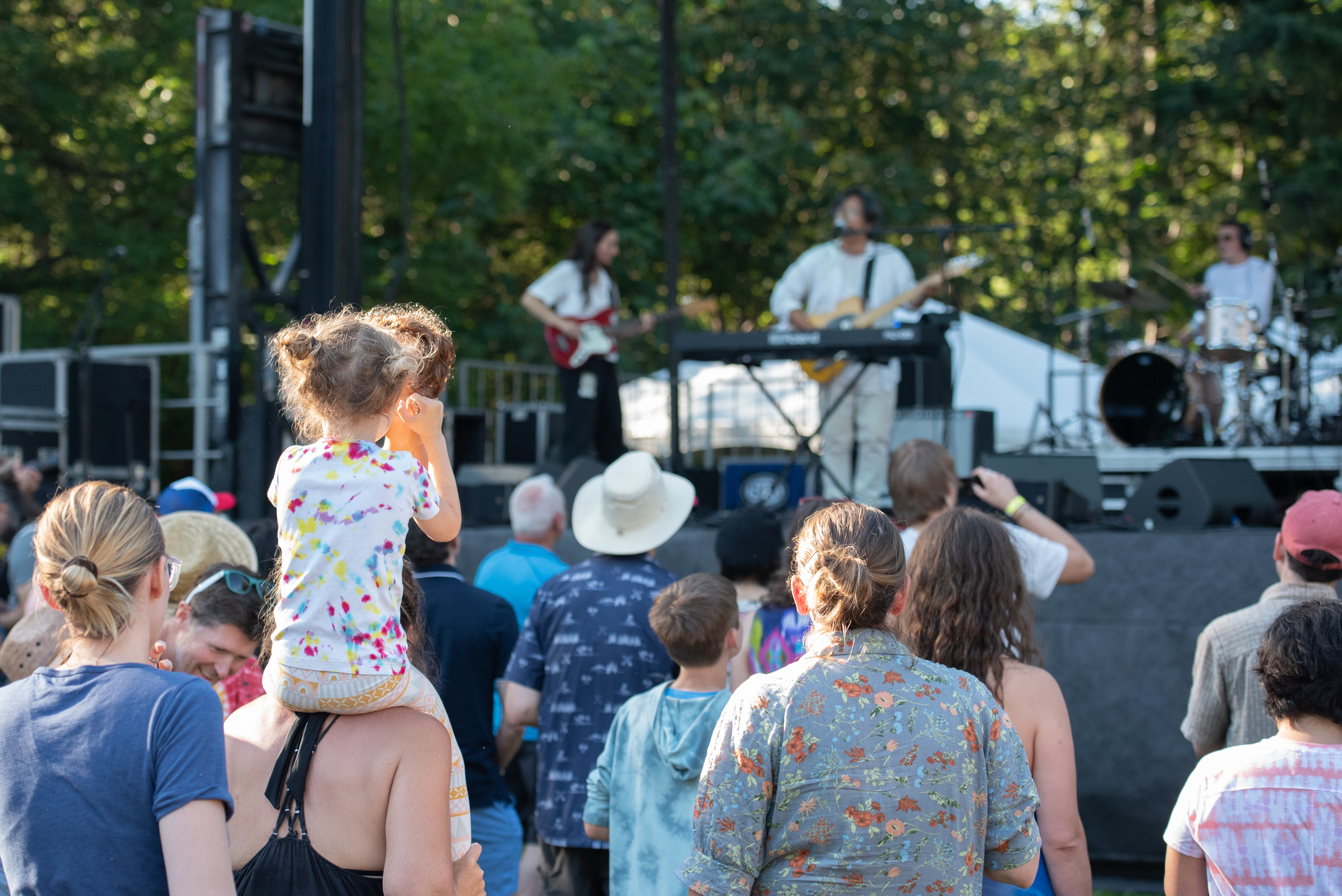 Hot take, Timber!’s Friday lineup was the best of the bunch. Not to talk down to the other two days but I was excited about every set I managed to catch and discovered some new-to-me bands that will stay in my playlist for a long while.

To start, Mr Dinkles, a local duo that bolstered their audience by taking part in MoPop’s 2020 Soundoff! competition, was my favorite act of the day. While they didn’t even make it to the finals in that competition (MoPop cut it short before the finalists could duke it out due to covid so no one actually wont that year!) I was blown away by their intensity, humor, and talent. Also, a bonus but less important, their name is a reference to Trolls and it makes me giggle every time I say it.

Next on my inspiration list is Pher (pronounced like “fur”), a soulful, smooth-voiced singer backed only by a guitarist to add a bit of a groove. The guitarist was great, but truthfully he didn’t need the backing music one bit. I would have been unceasingly charmed even if he’d just held a mic and sang for days. His music speaks for itself but he has a fantastic stage presence and oozes peace and joy from every pore, I can’t get enough.

Far from a new discovery in my musician rolodex, Tomo Nakayama soothed our souls on a hot friday afternoon with music mostly from his new album. Having known him through many musical iterations, starting with the epic Grand Hallway, I’ve been excited with each new turn his career takes. With more of a dance/electric sound Melonday (released in 2020) is so much fun to dance to but still holds true to that Nakayama sound of gentle and beautiful voice flowing along like water in a river simply making you smile.

Sadly I didn’t catch the Deep Sea Diver set like I’d hoped, lead singer Jessica had actually been part of the last show I’d seen pre-pandemic (her playing solo and opening for Joseph) and it was such a wonderful show to go out on, so I was bummed that work tore me away from this reunion. However, I was near enough so the yells, cheers and claps during the entire set echoed my way and I knew they were captivating the crowd as they always do.

Even though I’ve already gushed over Fiday’s lineup, Saturday, held its own with some talented folks you have got to check out.

Cassandra Lewis was up next and while she wasn’t my favorite act of the day, she really put on a show with her partner later on at the late night secret set. Tiki torches lit up their faces but not much else and their banter was everything. While I may have gotten a sugar overload from their gooey admonitions of love in songs they had written and sang to each other, they had just enough cheek and sass to bring me back on board and swaying to their acoustic ballads.

Built to Spill has been a staple of Artist Home events and they’re absolutely a crowd pleaser. I’m not the world’s biggest fan but they know how to create a chill and happy atmosphere. One connection that brings me joy is bassist Melanie’s other project Blood Lemon. I was lucky enough to see this other trio at Fisherman’s Village fest last year and holy wow. No wonder singer/guitarist Doug Martsch called her up and invited her to play. The newer iteration of the band (from a five-piece to a three-piece) gives Martsch’s music new life with strong punk women at his side.

The final “regular” set of the evening was a powerful, quiet, emotional one with the Milk Carton Kids. I don’t know that I’ve ever seen them live, but even if I had it wouldn’t have been anything like this. On the small campfire stage the duo stood close together instruments in hand and wrapped the audience in a giant blanket of comfort and contentment. Their ballad-like performance and love for each other was the perfect way to close out the night, I couldn’t imagine a better band to finish things off.

Now I know I said The Milk Carton Kids closed out the night, but that’s not exactly true. They were the last “proper” band to perform, but some very talented musicians came together on stage to perform a small book of Simon and Garfunkel songs. This wasn’t just any performance though, the audience members were meant to join in as lyric sheets were passed around. Arms entwined, shoulders linked, voices loud, the entire field was filled with joy and beautiful music.