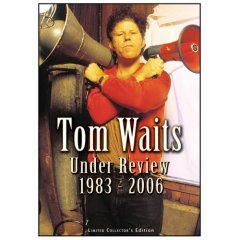 I will admit that some of the early Under Review DVDs were kind of shaky. If you bought one of them back when the critics discussing the albums were primarily old British guys you'd never heard of and there was no real footage of the artists then you may wonder why the series keeps going (new titles often found in the front of Easy Street Records or with the new DVDs at Sonic Boom). Thing is, they evolved, adding better known British critics (not all of them old) like Barney Hoskins and giving Robert Christgau an uncensored platform to eviscerate some myths you might have about your favorite records. Also very cool is the use of more clips and videos of the artists, and the recent ones featuring Bruce Springsteen, Van Morrison, Leonard Cohen, and now especially the new Tom Waits one are especially extravagant with said footage. The rare photos, music samples, weird facts, and complete coverage of a timeline in a musician's career is extremely helpful to anyone who wants to get a good critical foundation of appreciation for the artists MVD has released these volumes of.

The new "Tom Waits: Under Review 1983 – 2006" is possibly the most important one for Three Imaginary Girls readers, as it covers an artist who multi-generational fans feel no guilty pleasure at all about enjoying, jumping in at any of the spectacularly debris-strewn train-yard cross-sections of the nimble scarecrow god's extremely consistent career. There are iconoclastic but trustable MOJO and Uncut contributors like Nigel Williamson and the aforementioned Mr. Christgau who actually debate very openly with some of Waits' biographers about the quality of some of the records, and it is just like having a drink with some of the EMP Pop Con presenters on the Saturday night of the Conference when people are willing to spill out exactly what they think about their favorite or despised chapters in an artist's career, fellow critics be damned. (Actually, this sort of thing happens even during the Q&A at the daytime panels themselves, but I for one have been learning to control myself, so Mr. Christgau doesn't make fun of me again.)

Remember, these critical assessment videos are quite entertaining and will teach you some things you may not know about artists you may need to write about of study deeper on, say before an interview (Cliff's Notes, cough, hint hint) — and again, more and more, people truly behind the scenes of the decisions made by the artists while recording their albums are more prominently featured. Bones Howe, for example, was always a mysterious figure to me, as I hadn't bothered to look at the other album jackets in my collection of music he'd also produced, imagining him to be a scary Hollywood noir mentor to Waits alone. (Turns out he was a friend of the Wrecking Crew, the super session musicians who made most of the music on landmarks like "Pet Sounds" or "Mrs. Robinson" and rarely got credited for it; see the documentary from SIFF on them when it gets distribution.) Howe admits when Waits started striving for his early 80s "junkyard soundtrack" style (openly starting to borrow from Harry Partch, Captain Beefheart, and Kurt Weill), leaving behind his more melodic cinematic soundscapes and piano it was time for him to go. This was because of Kathleen Brennan, whom Waits had met during the making of "One From The Heart," the last album (and actual soundtrack) in his original style (and a wonderful parting of the ways with Howe; songs like "Broken Bicycles" could be on anything he's released since). They became passionate partners and collaborators, apparently saving Waits' life in more ways than one.

OK, much of this may already be known by the Waits devotee, but there are little things the "Under Review" does that makes it worth your time: For example, while I owned "Real Gone," Waits' 2004 album that features some very politically pointed (for the first time in his career) material material, I never had time to listen to it. Christgau and other critics tell me exactly what tracks to go for to dig deeper into it though, and now I've been playing "Hoist That Rag" non-stop the past couple of days, and enjoying more of the record than I had any of his since "Bone Machine" in 1994. So whilst the "Under Review" series can tip younger fans into checking out older albums (go get "Swordfishtrombones" and "Rain Dogs" now, kids), it also compels vets to keep checking out what artists who transcend career entropy ae doing, despite interest fatigue. Because a guy like Waits, you don't want to be a sleeping dog around.