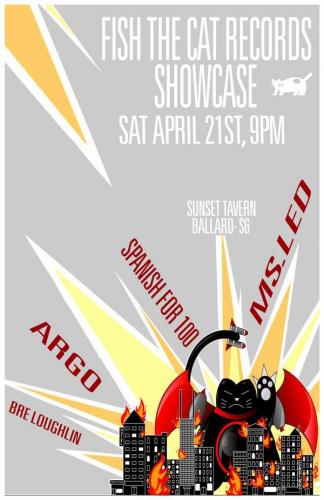 This show is a showcase for Fish the Cat records, a label started by the folks in Ms. Led years ago as a way to put out their own music and the music of their friends. The label has stayed true to this mission, promoting local Seattle bands and helping them get distribution and all that other not-so-fun but necessary stuff that most band peeps don't want to worry about.

Tonight's event highlights same of the Fish the Cat bands with recent or soon-to-be-released records: Argo, Spanish for 100, Bre Loughlin (ex-Daylight Basement and Kuma) and of course, Ms. Led themselves, who have a new full-length due out in June called Shake Yourself Awake. Ms. Led perfectly blend pop-punk music with political earnestness to create tunes that help you rock and shake out your indignations with the world, and as a live act they never fail to please.

Ms. Led will celebrate the release of Shake Yourself Awake officially on June 22nd at the Sunset (and will be touring around the western half of the country between now and then, tour dates here), so why not come tonght to be among the first to hear their latest and greatest first?