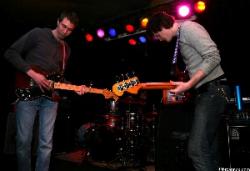 This event, co-presented by Velouria Boutique and Sonic Boom Recordings, is a perfect melding of Indie Rock meets Indie Style. The show not only features two great local bands — Siberian and Ghost Stories — but also will have local models displaying the latest fashions by independent designers before, between, and after each act. Also, it starts early, at 8:30, so don't dilly-dally.

I attended the last Velouria and Sonic Boom-sponsored event last fall at the Triple Door, and it was definitely a smashing way to spend the evening. It fulfilled all my pret a pôrter rock and roll fantasies.

The night is about celebrating small independent businesses that help emerging talent in music, art and fashion.

Worth it to attend to catch Siberian alone, who recorded one of my favorite local releases so far in 2007, with brit-pop flavoured soaring melodies and bombasic vocals. It sounds kinda like all the good elements of the Coldplay/Travis genre of indie-rock without any of the wankery ones.

Aside to Velouria: congrats on the Daily Candy shoutout! It's about time they caught on to what's good in this here town…