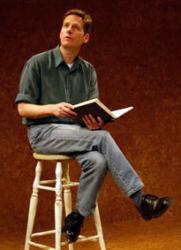 I thought a lot about the fantastic Gregg Araki film Mysterious Skin during writer/actor Martin Moran's challenging, Obie Award-winning solo show The Tricky Part (an 80-minute stage version of his much more detailed memoir), now playing at the Intiman. Both deal with aftermaths of childhood sexual abuse in profound and brave and unforgettable ways, deftly weaving bitter-reality flashbacks into coming-of-age stories that are alternately wrenching, offbeat, inspiring, terrifying… and hilarious.

In his mild, congenial manner, Moran begins his autobiologue by bounding on stage before the lights have dimmed, delivering the usual pre-show house announcements, and engaging the audience in lighthearted ad-libbed banter. (It took 10 minutes or so — well into the series of humorous growing-up-Catholic-in-Denver stories — for me to realize that the theater was dark and the play had actually begun in earnest.)

After a series of very funny anecdotes about nuns and folklore about legendary saints (many of whom were fated for fabulously horrific demises), Moran reveals that, at age 12, he began having sexual encounters with a 30-year-old man. "Bob", a counselor at a Catholic boys' camp Martin attended, was a physically impressive outdoorsy type who also introduced Martin to ranching and carpentry and the great outdoors. Martin both admired and detested Bob, and after Martin cut contact (three years later), his subsequent life included suicide attempts, depression, and sexual compulsion. The trauma's repercussions are mentioned only briefly, but that's really all it takes.

Facing his now frail and sickly tormentor in a Virginia convalescent hospital 27 years later, the adult Moran expresses his anger and ambivalence. It's a severe showdown, but a necessary and admirable step toward wholeness for Moran; he's managed to find light in what seemed to be only dark. Not every sexual abuse victim goes out and becomes an actor, then is courageous enough to confront the ordeal head-on night after night. With The Tricky Part, ever-appealing Moran reaches out to those still living with horror stories of their own.

Staging is refreshingly frills-free — the only real prop is a photo Bob took of a jubilant 12-year-old Martin standing in a kayak — and the resulting proximity between actor and audience is both tender and disarming.