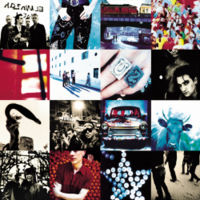 "Tryin' To Throw Your Arms Around the World" by U2

Sure, Secretary General Bono and the lads haven't really made a good song in quite a few years, I still give them credit where credit is due. For one thing, they seem to be pretty comfortable which ditching a sound that made them popular and replacing it with something different (albeit still alternative rock – I'm not talking hip-hop to opera here), and the case in point is Achtung Baby. Now, many people I knew hated it when it came out — remember, this was the early nineties, people were expecting more Joshua Tree/Rattle & Hum type stuff from U2, but instead they get all dancy (well, dancy for the time) and release an album that is arguably a classic for the decade. OK, sure, the band might have gotten carried away a bit with the followups (Zooropa and POP, both of which I think get unfairly maligned), but the band was taking chances. "Tryin' to Throw Your Arms Around the World" is U2 at its worst and best. The song a killer, low, rumbling Adam Clayton bassline, Larry's odd tin can drumming and The Edge playing a drifiting, ethereal guitar line doing what his does best (and you have to respect a guy who built his own electric guitar as a kid and played the keyboard with his feet during the ZOO TV tour). Bono's vocals are in that transistional, "I have a falsetto!" phase, but man, the lyrics are a truly Bono mess: I dreamed that I saw Dali/with a supermarket trolley? Huh?

Anyway, U2, no matter how ridiculous they become, will always have my love and respect — and I suppose I need to keep that up as we wait for Bono's inevitable rise to world leader, eh?