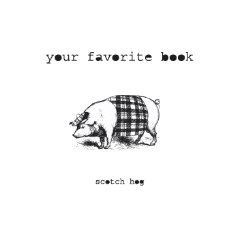 Scotch Hog, the new record by Seattle band Your Favorite Book, might not turn heads for its production prowess or snazzy social networking skills, but that’s exactly what makes it so compelling. In the wake of recent marketing and friendly schmooze-fests out there, YFB’s understated acumen charms listeners with simplicity and authenticity.

The band has quietly been making music for a couple years now (TIG became acquainted with them when we played their song “A Belt Right Smack in the Mouth” on a visit to KEXP’s Audioasis radio show a little over a year ago). Scotch Hog maintains many of the delightful elements we first heard back in 2005—their candid Weakerthans melodies, John Linnell-esque nasal vocals, and early Mountain Goats lo-fi acoustic guitar—but the YFB folks have matured a bit with the songs taking a less jokey, more contemplative narrative on interpersonal relations. The tenability of each song is enhanced with the addition of gracious piano accompaniments and captivating vocal crescendos. There’s still little sign of a drum set, but who needs that when you have catchy acoustic guitar strums intertwined with apartment-style’d narratives, recorded with disarmingly lo-fi DIY enthusiasm.

The album begins with “Cold,” which spotlights YFB’s prevalent staccato guitar jabs intertwined with couplet passion, bringing to mind a bootleg version of Neutral Milk Hotel’s “Two-Headed Boy.” Even though “Mountains of Foam” features boisterous guitar jabs and forceful male vocals, the subtle female back-up vocals are brought to the forefront as the dueling vocals take different roads to the same end of the angst-ridden chorus, “Sail on / Clinging on to the flicker of hope that this world might one day feel like home again.”

“Sparrows, Sparrows,” with its repetitive acoustic guitar measures, lyrically engages with its inquisitive refrain, “What about you? / Well, what about you?” against the subsequent chorus of “What will I do? / And then a bad idea dawns: Oh, it’s on. I know what I’ll do,” to keep the tension brewing.

Scotch Hog is an album for those feeling slightly technophobic. With the heaviest of nods to John Darnielle/Mountain Goats, YFB’s songs shine with thrifty minimalism and while taking the same familiar path forged by DIY singer-songwriters with macchiato habits. The result is a balanced set of songs that are wistfully pleasant and unencumbered.