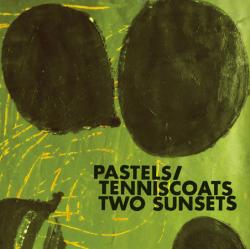 Two Sunsets is a single disc release from a Glasgow band, The Pastels, and a Tokyo band, Tenniscoats. It was recorded when Tenniscoats had some studio time booked in the former’s city, and they collaborated “just to see what would happen, and maybe find out what it is they have in common,” their label Domino proclaims.

Many people will be attracted to this release due to the irresistible treatment of The Jesus & Mary Chain’s About You, the b-side to the pre-release single “Vivid Youth.” Both are excellent examples of a twelve song full length that treasures melody as much as lassitude, its modality of warmth generously consistent.

Just like how the recording process got off to a slow start, the opening instrumental, So Many Stars, seems hesitant, like a newly birthed animal getting its legs. It’s a beautiful critter though, a slow, bass-heavy Velvet Underground (third album) style shimmer, evoking a blissful mood with no no haste or pressure. Then the title track features vocals from Saya, and her lovely voice describes a pastoral utopia, as if it’s a summer morning after the sparse dawn-dub of So Many Stars.

Ueno from Tenniscoats’ guitar playing combines well with Stephen, Katrina, and Gerard from The Pastels, but also leaving room for the legendary Norman Blake (Kevin Ayers, Soup Dragons, BMX Bandits) and Bill Wells (Ayers, Isobell Campbell) to help paint the sounds. This means the song cycle is even more talent-rich than you expect, and the two primary bands were promising enough. While nothing is surprising, it’s all pure pleasure, cooked low and slow and with a very bearable lightness of being.

FYI: The Darkland-era J&MC cover was originally recorded for a theatre production by the groups, but both bands seemed happy placing it in tis sequence as well.