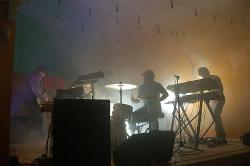 Healthy Times Fun Club is gaining popularity as one of the best speak-easy status venues, with its clandestine location, to catch bands in Seattle at the moment.

On their latest show this past Saturday, at first I didn't know what to expect of visiting California duo Afternoon Brother. The drummer was sporting purple pants and the guitarist had a striking resemblance to another guitarist I know. Their music came loud and chaotic, and initially I thought they were trying to push too much into each song. Yes, they were two highly skilled musicians, but I felt they didn't need to demonstrate all their talents in each song, most clocking in around 60 seconds.
Yet, as their set went on, I began to realize this was the only way they could play their music. Afternoon Brother needs to have the all or nothing calculations and equations. My thoughts for whether I liked them went from, "Meh, I've been drinking" to "Hell yes!" The place was packed as they wildly thrashed through each song, a few of the crowd slowly changing from dancing along to staring in awe. There may have been comparisons of Lightning Bolt suggested at the end of the set. I'll say their MySpace does them no justice at all.

I don't know who this Snowman is or what his Plan is, but I fully agree with it. The Seattle trio with the moniker are perhaps one of the most technically tight bands you may not have heard of–yet. With a drum and bass foundation, and video game-esque programmed electronics, they replaced the standard guitarist for a violinist who rocks the classical instrument harder than I've seen most guitarists with their strings. I'd be interested to know how long they've been playing music, as it seemed to me they were born to do it. I'll admit I was a bit worried the headliner couldn't top the two amazing openers, but I left saying, "Ho-ly…shit." It's only February but I may already appoint this one of the best of 2008.