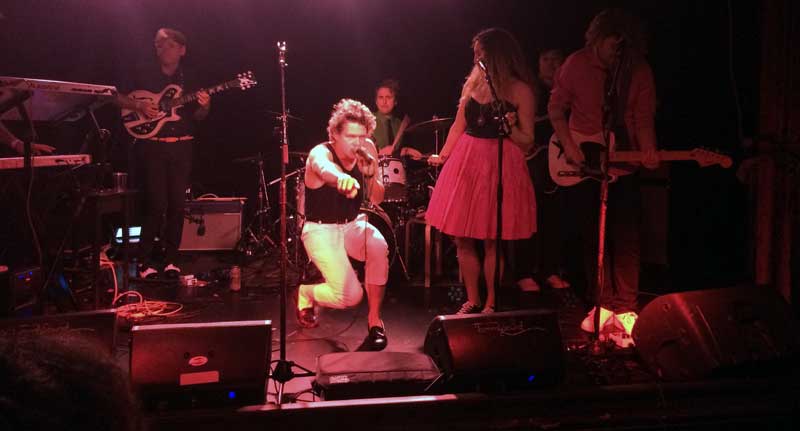 We are just about recovered from Sunday’s New Wave Night party and hope you are too! Because… it’s time to share some videos of the NWN performances!

Did you have a favorite song or performer? Yeah, it’s impossible to pick. For those who might have misplaced their notes, the set list went a little like this:

Can I get another round of hearty applause for the backing band?

We were super lucky to have the best backing band around to accompany each singer. In case you missed their intros – make note of these peeps – they are a force to be reckoned with:

Now on to the videos of each set!
(you can watch them all back to back here)

“Don’t You Forget About Me” {originally by Simple Minds}

I can’t think of a more perfect way to start off the show than Ian McCutcheon’s rendition of “Don’t You Forget About Me.” The outfit, the dance moves, the alluring jump into the audience – it was my dream of living in a John Hughes movie. (more about Ian’s band Familiars)

“A Little Respect” {originally by Erasure}

I listened to Erasure’s third album, The Innocents, on repeat the summer of 1990. The heat in Chop Suey paired with Taryn’s amazing rendition of my favorite song from this album took me back to those carefree days. My bestie and fellow The Innocents superfan, who is usually fairly reserved, actually screamed aloud when the song was done. We both had tears in our eyes. Adra Boo accompanied on backup vocals for this song. I know right?!?! Can I get a whole album of them covering this song?

A quick perusal of the Aaron Starkey catalog proves this fella knows his stuff and can conquer it loudQuietloud. I loved his performance of one of my Smiths’ favorites when I saw it live, but on video playback, I’m even more floored by the guitar solo Aaron added to this song. It takes it up and over the edge of brilliant. (more about Aaron’s bands Gibraltar & OCEANWIRES)

“Is She Really Going Out With Him” {originally by Joe Jackson}

Besides magnificently carrying the New Wave tunes, Ryan Devlin & Kim West took it up a notch in the show attire department. I’m not sure I’ve ever seen a coral collared pant suit sported so flawlessly – with matching white keds sneakers! Kim’s fashion paired with Ryan’s leisure attire made watching their flawless performance wonderfully surreal. I’m not sure the video does it justice, so keep your eyes peeled for Morgen’s amazing photos of the show, coming soon! (more about Kim & Ryan’s band Smokey Brights)

There’s not a lot about this world that makes sense – but Kurt Bloch covering Elvis Costello’s “Radio Radio” – now that makes sense and it makes things feel better for the 3:03 minutes it plays. Kurt embodies what makes rock ‘n roll – and these new wave songs, so infectiously fun. What a surprise to have TIG’s very own Brady Harvey duet with Kurt on the classic 80s relationship drama, “Don’t You Want Me”!!! The pair synth-rocked it out of the imaginary park with dance moves and dueling vocals that make us want to jump up and down on end. (more about Kurt’s bands The Fastbacks, Young Fresh Fellows, Filthy Friends, Full Toilet, Thee Sgt. Major III)

“Rip It Up” {originally by Orange Juice}

Hi Orange Juice fans! Can I be honest? I like this version with Tomo and the TIG backing band better than the original. He hit all the notes with a flair and tone that takes this song to a whole other place for me. I’m not the only one. A friend who is a huge Orange Juice fan took his hat off to this cover and even remarked that the sax player played it better than the original (I’m slightly paraphrasing, but it’s all to say…) the band rocked it and a note to Tomo – THANKS FOR PICKING THIS SONG!!! (more about Tomo’s musical endeavors)

Ok, when Adra Boo tells me to party, I party! If you’ve ever seen her perform before, you know that Adra should give a masters class in how to take parties up a notch. Her two song performances were flawless (just as you’d expect) and the intensity made us all sweat off our sparkly eye shadow and hair spray. This is what the parties were like for the really cool kids in the 1980s. I can’t believe our luck that we got to know that feeling. (more about Adra’s musical endeavors)

Andrew made covering Bowie look easy – but we all know better. What a way to top off the band portion of the night. (Spoiler alert) Two words: TWO SAXOPHONES! It brought together the glee and sing along spirit that filled the whole night. Group hug!!! (more about Andrew’s band SISTERS)

Now do have a favorite? It’s hard to pick. Each one has a special place in my heart which is why I can’t stop watching each of them.

There are performances that we weren’t able to get footage of {I shake my fist at you, technology!} so if you see video of any of the ones we missed floating around – share it with me immediately! I want to see them!!!

Stay tuned photos from the photo booth and the live sets are coming soon!