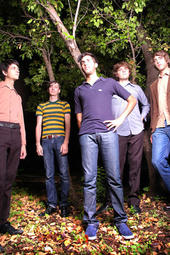 It seems like indie-darlings Voxtrot have been riding the success of their EPs (which some consider only singles) for a while now. It is with a sigh of relief that I report that they've finally announced the details for a full-length album of their very own.

To help us carry through to the release date of this long-awaited self-titled piece of work, they've given us an MP3 for the song "Kid Gloves" from the album.

The album was recorded with award-winning Australian producer Victor Van Vugt (Nick Cave, Depeche Mode, Athlete, Beth Orton) and they promise that none of the tracks from the album have ever been released.