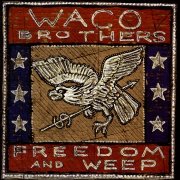 This is a PISSED OFF album, made by a gin-soaked gaggle of British and American club-crawling punk Godfathers, and it's full of snarling but smart complaints and lamentations about dumb-ass Christians and greedy fucking Texas warlords and how "If you think you're getting screwed, join the club!" The tasty minimum wage gruel of timeless rock, fuel-pungent gas station 70s folk and country, and it's-fucking-late-I'm-out-of-here pub-punk, perfectly matches the kidney-punch of the working class poetry smoothly sung by several of the musicians.

Speaking of the musicians, it's hard to believe that various Waco Brothers have been doing this for seven records, but Jon Langford (Mekons) sexily leads his band through these lucky thirteen songs about bad luck and bad faith, featuring Wreck's Deano, Graham Parker's drummer Stephen Goulding, mandolin player Tracy Dear, and the bass player from Jesus Jones (!-Alan Doughty) and Mark Durante, the steel guitarist from — KMFDM? The Revolting Cocks? What the fuck?!

Oh, what the hell — times have been weird for everyone, and we're all in the same post-election shit-hole. Anyways, the Waco Brothers are coming to the Sunset Tavern on September 25th, and I wouldn't miss it for anything. Just seeing Langford brings back for example the gorgeous raw energy of Joe Strummer at the Showbox a few years ago — these are the equivalent of blistered bluesmen, full of stinking anarchist urine from the most fermented swing-time wine. Don't miss it, this guy's a swanky goddamn comet, and just gets full of more roots-rock fire with each passing year.

The songs you'll be hearing in a couple weeks will include the opening not-making-it-by-payday basher "Nothing At All," the have-hope-or-die atheist-gospel flow of "It's Amazing," and especially "Chosen One," one of Langford's greatest rants ever ("Loaves & fishes — guns and drugs — cruel New Jerusalem — You're faith is shaken, no mistaken — We're only as strong as the drugs we're taking"), feeling like something Dylan would have imbibed, scribed, and shrived for "Highway 61 Revisited" (seriously). In fact, the fed-up, mystical, religious-political melancholy of that classic rock album feels like a hurtful hangover all the way through Freedom And Weep.

It's that good, that sad, and that NECESSARY.