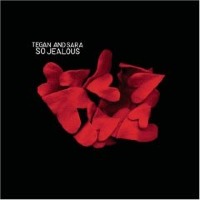 "Wake Up Exhausted" by Tegan and Sara

I've long thought that the shuffle function on my iPod was psychic — and this morning's first song of the day further confirmed that suspicion.

"Wake Up Exhausted" by Tegan & Sara from their third album, So Jealous, greeted me this morning as I stepped outside for the walk to work. After back-to-back late nights followed by early mornings, the song's simplistic signature sass-folk and biting lyrics (and fitting title) helped me at least laugh off a bit of the enervation.

Imaginary Char (who has a penchant for female vocalists) introduced to me in the fall of 2004, around the time when the sisters were touring the states in support of this classic album. Since then, it’s become one of my favorites, and it marked a turning point in my musical leanings. Up until this time I was staunchly anti-female vocalists (I blame roommates who overplayed the Sundays and Indigo Girls). But with the introduction of Tegan & Sara, I found myself connecting with the sisters and it opened the doors to being smitten with modern pop-princess bands like The Catch and The Eames Era. That’s the kind of power this confident twosome have; they not only made me a fan of theirs, but also of contemporaries in their genre.

Dana, Char, and I loved the album so much, we even did a three on one interview with Tegan… she's rad.