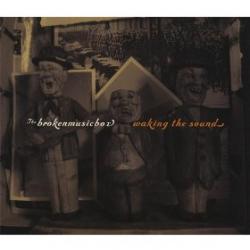 Gracing the cover of The Brokenmusicbox’s debut album is a photograph of three wooden figures that resemble a band of drunken street performers, with some sort of archival militia snapshot in the background. It is a curious image to set eyes on without knowing anything about this San Francisco group or its music. Once spinning, the music on Waking The Sound leads you into a dimension where that front cover photograph becomes a fitting snapshot for the acoustic lullabies that spill forth from the speakers.

The two central members of The Brokenmusicbox are Tony Wentzel, who played almost everything except drums, and Kimberly Contreras, who handles the vocal duties. They wrote and performed the bulk of the material, which consists of lovely meandering melodies akin to Sparklehorse and Throwing Muses. Add a couple of guest musicians like Jason Ruck of the terrific psychedelic group Film School and you’ve got a successful musical collaboration and a solid debut release.

Electric piano and sleepy guitar fuel “Undercover,” a forlorn song that sounds like it has one foot in the 1960s and the other foot on stage at Coachella last summer. The song combines playfulness and a feeling of helplessness. Similarly, there are other moments of childhood despair such as ”Me and You,” which features a faster tempo and a bluesier feel. Elsewhere, “Time” resonates with marching band drumming and Tom Waits-like accordion. This is folk without the freak and that is good.

Waking The Sound is a well-produced album with beautifully crafted songs. With autumn approaching, this is the kind of music for dark evenings near a fireplace with either a cup of coffee or a glass of wine close by. Hopefully, they will have some tour dates in the near future. They would be the perfect group to see at the Tractor Tavern.