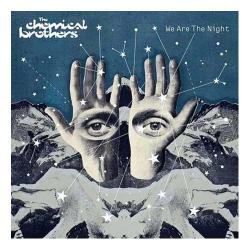 We Are The Night

Let us review the life and times of the Chemical Brothers…

1995 – Exit Planet Dust – If there was a gateway drug for electronic and all the subgenres that surround it, “Life is Sweet” from Exit Planet Dust would be it. The song, which featured Tim Burgess of the Charlatans UK on vocals, was ridiculously infectious and hit me right as I started being a freshman college DJ at WCFM. Susceptible I was, and they had me hook, line and sinker. Pop on a pair of good headphone and listen to the opening salvo and if you’re not getting that funny “I’m falling in love” feeling, then you need to lighten up. Pure bliss, that is what “Life is Sweet” is.

(1996 – If you want to hear the best Chemical Brothers song even, try “Loops of Fury.” It wasn’t even released on a proper album – just on its own EP – but it is truly phenomenal.)

1997 – Dig Your Own Hole – Indeed, they were back with another one of those block rockin’ beats. (But really, the apex of the Chemical Brothers after “Life is Sweet” might be “Where Do I Begin?” with Beth Orton – it is a masterpiece.)

1999 – Surrender – Chemical Who? The US public had amnesia for electronic, replacing it with boy bands and rap-rock, leaving the brothers to mess around with Missy Elliot and Bernard Sumner, with remarkably dull results – even with the whole “Hey boy, Hey girl, it’s your birthday” bit.

2002 – Come With Us – Back to the underground! Also, suddenly the Chemical Brothers are, well, just not cutting edge. They still can make the room shake though, “It Began in Afrika” a perfect example of that skill.

2005 – Push the Button – Fully forgotten about by most, the Brothers put together one of their better albums, especially “Believe” with Kele Okerele and “Left Right” with Anwar Superstar.

2007 – We are the Night – Wow, we’ve had a solid 12 years of the Chemical Brothers, and what have we learned? Tom Rowlands and Ed Simons have longevity that their “electronic” revolutionaries like the Prodigy and Moby could only dream of and while the other produce horrible rock albums or, well, disappear, the Chemical Brothers keep motoring.

And motoring (well idling) they are.

We are the Night is about as “by-the-numbers” as an album can get, reinforcing the idea that the Chemical Brothers peaked early, declined and have leveled off. There is a statistical concept in baseball, the idea of a “league average” player – a player who’s skills are pretty much what you might expect if you put all the players in the league into a blender and made them all equally talented. What you end up with are players that aren’t good as such, but just get by, hitting every measure adequately enough not to get released or sent back to the Salt Lick Seesaws. The Chemical Brothers have become the “league average” DJs, where once they were gods, now they stand on the same level as, oh, somebody like the Crystal Method or BT – they’re on the downside of their productive years.

I’ve attempted to listen to We are the Night with as much of a positive light as I can, but each time I listen to the album, all I hear is, well, nothing. There seems to be little substance to the disc, they are just going through the numbers. Even the guest list is uninspiring: Ali Love? The Klaxons? Willy Mason? Not much there.

The album opens with an odd little intro that takes us into the title track that really goes nowhere – it seems to have all the pieces of a decent Chemical Brothers song, but never comes together to sound like anything more than just a shadow of the band. The appearance of the Klaxons on “All Rights Reserved” really doesn’t do anyone justice, neither the Brothers nor the band. Really, in a sense, the two acts aren’t really have diverged on the musical tree, so it just feels like a watered down version of either acts songs. Although “Do It Again” has a little more life to it that the aforementioned tracks, we wonder “did we hear this, but better, as ‘Galvanize’ with Q-Tip on Push the Button?” “Das Spiegel” turns out to be wannabe Daft Punk – sad for these guys. I’m not sure what to make of “Battle Scars” just yet, it is sort of interesting, but feels like it doesn’t have the appropriate Chemical Brothers energy.

Then comes “The Salmon Dance.” Yes, my friends, this song isn’t just named after the plucky fish, it is about the fish. For all of us who have longed for a dance anthem about salmon, the Chemical Brothers heard your prayers and answered them in the most absurd way possible. I hope beyond hope that this song is tongue-firmly-in-cheek because then we can at least all be amused, but it is disturbing to hear the Chemical Brother venture into what can only be called Weird Al Yankovic territory.

Of course, these are the Chemical Brothers, and even if they aren’t the players they once were, every once in a while, they’ll come through like you remember. “Burst Generator” has the Brothers working it out in a glorious fashion – light, airy and gorgeous. The album closes with “The Pills Won’t Help You Now,” which turns out to the high point of We are the Night. It is one of those beautiful Chemical Brothers “ballads,” both somber and melancholy but hopeful and inspiring, all at the same time. This song belongs in the same class as “Where Do I Begin?”, showing the remarkable depth that two DJs can create in their studio lair – it is a depth for which most conventional bands would die.

I don’t know why I think like this review feels like a eulogy. Not that I think the Chemical Brothers are going to be pushing up the daisies anytime soon, just that maybe they’ll never recapture that glory that surrounded them. Of course, that sense of majesty might have been equal parts talent and timing, with the Chemical Brothers arriving at just the right time to capture our imagination. We are the Night lacks that temporal framework to make it seem so right, and maybe that’s what it just seems so wrong.